Tiny, mobile churches proposed as a solution to the Church crisis

Church comes to the people

Tiny Houses are well known by now. But Tiny Churches? They can currently be seen - in model form - in the Marienkirche. Students of the Münster School of Architecture have designed mobile churches. And one idea, in particular, struck a chord. 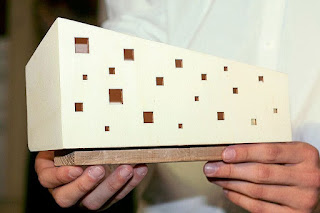 The very model of the modern church. Tiny, aesthetically deficient and always on the run.

The winning design by Johannes Pietz and Rasmus Ellerhoff in the model: the conical body of the church gains height in the altar area and visually opens up the space of the mobile church.

The idea of a church on the move has been on parish priests, Dr Ludger Kaulig's mind for some time. "What would it be like to have a church with you on pilgrimages to Telgte or during devotions in nature?" The Catholic city priest had asked himself that many times.

It was at a meeting with the committee members and representatives of the Catholic Union of Women, rural women and rural youth in the winter of 2021, in the midst of Corona time. "We just spun around," Kaulig recalls in a lively exchange with Birgit Schlüter, team spokesperson for the countrywomen, who, like many others, found her way to the Marienkirche on Thursday evening. There, she is awaited by almost a dozen designs for a Tiny Church, which students of the Münster University of Applied Sciences in the Department of Architecture, the "Münster School of Architecture" (MSA), have produced as a semester project. The task was set by architect Matthias Fritzen as part of a teaching assignment.

The idea of having students work on the theme of the mini-church or Tiny Church was gratefully accepted by those responsible in the parish. The reception at the first presentation of the designs, to which only a few participants came due to holidays, was correspondingly warm.

Johannes Pietz and Rasmus Ellerhoff scored the most points with their design for the five-member jury. It envisages a mobile, small church, mounted on a trailer, made of wood. The interior, which can seat eight to ten people, appears very bright due to the windows set into the walls. The body of the nave gains height towards the altar and is somewhat flattened in this area. What the jury liked, among other things, is that the interior is completely empty in its raw state. If necessary, pews are folded out of the side walls, and the altar only becomes visible in this way.

The specifications to be observed were kept to a minimum and included, among other things, the height, which could not exceed a certain level because of the need to pass through subways.

"We have quite a few good designs here," Matthias Fritzen noted appreciatively. Not included are the costs, which the Hammer company Diekmann, which specialises in Tiny houses, calculates at 70,000 to 80,000 euros

The designs will be on display in the Marienkirche for the next four weeks. On 29 August, a public event will be held on the subject.

This is an old idea, which is being presented as a novelty. At least this one has a steeple. 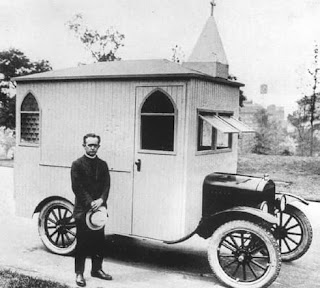 10[16] And he said to him: Come with me, and see my zeal for the Lord. So he made him ride in his chariot, dixitque ad eum : Veni mecum, et vide zelum meum pro Domino. Et impositum in curru suo

14 [6] So he made ready his chariot, and took all his people with him. Junxit ergo currum, et omnem populum suum assumpsit secum.