As they leave the church, which has just been consecrated with a Mass, the faithful warmly thank a tall man in a white shirt. Husejn Smajic did not attend the religious celebrations but the Catholic building would not exist without this Muslim who believes that a fraternal Bosnia is still possible.

Since the inter-communal war that killed 100,000 people in the 1990s, Bosnia has been divided along ethnic lines, with a Serbian entity and a Muslim-Croat federation where the two communities live together with difficulty.

Bugojno is not spared. Most of the Catholic Croats, 34% of the 47,000 inhabitants of this central Bosnian town before the war, were expelled in 1993 by Bosnian Muslim forces and less than a third have returned. Crimes were committed on both sides.

Eight years ago, while building an artificial lake on his property, the retired businessman discovered the foundations of a medieval Catholic church. Cardinal Vinko Puljic, then head of the Bosnian Catholic Church, inspected the site, where 12 skeletons were found, along with shreds of a golden robe, which archaeologists believe may have belonged to Queen Jelena Gruba, the only woman to rule the medieval Bosnian kingdom in the late 14th century. 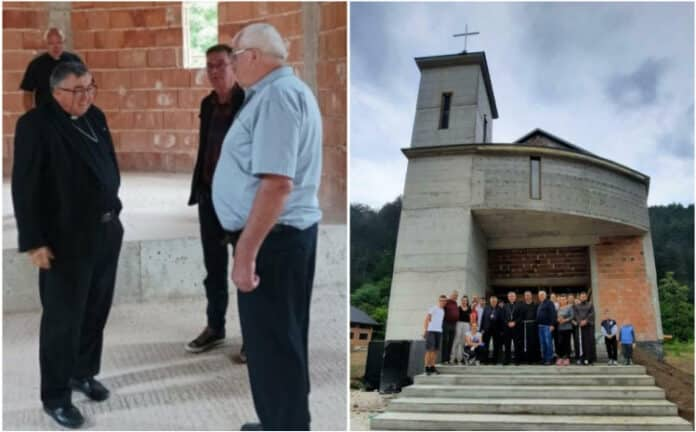 Husejn Smajic then decided to realise his vision of a multi-ethnic Bosnia.

He handed over part of the land he inherited from his parents to the Catholic Church, and started work on a new church near the remains of the one that was probably destroyed during the 15th century Ottoman invasion.

The owner of a sawmill and two small hydroelectric plants, he is relatively well off and has financed most of the operations. He also called on his partners and received donations of money and materials from Croats as well as Muslims and Serbs.

"I did this so that people could see that we can all live well together. There can be no beauty here without a mix of communities, that's our wealth," he told AFP.

He is married to a Catholic woman, Vesna and knows what he is talking about. "I've managed to live with my enemy for 45 years now," he quips. Their three children now run the family business.

"His family, a mixed marriage, him Muslim and his Catholic wife, his daughters married to Catholics, is the particularity of this country in which we live with our differences and where we can live together if we respect each other," Bishop Puljic told AFP with an approving smile, after consecrating the new church.

In the 1970s, inter-marriage was common in the small Balkan country of 3.5 million people - Muslim Bosnians, Catholic Croats and Orthodox Serbs. The war has largely torn apart the three communities, including families, and multi-ethnic corners are rare. Often, even in multi-ethnic localities, children do not attend the same schools.

Leaving the church, with tears in her eyes but "happy and proud", Zeljka Sistov Franjic, a 61-year-old Croat who now lives in Croatia, believes that Smajic's gesture is of "great importance for the cohabitation in Bugojno and Bosnia".

Her 78-year-old father lives alone in Bugojno and is looked after by Muslim neighbours. "This is life here," she says.

"If we were all like him, if we all had this love for each other, I think this country would be so happy and no one would go to Germany, Austria or Switzerland. We would make a Switzerland here," said Mihovil Klisanin, in his sixties, among the hundreds of worshippers who attended the Mass in the church and outside.

Every year, tens of thousands of Bosnians flee their country, one of the poorest in Europe, for economic reasons and because of the lack of prospects in a system where political elites clinging to power have no interest in change.

"People like Husejn are rare in Bosnia, especially after these tragic conflicts. He has a heart as big as a mountain," says Frano Glavas, 58, a Croat from Bugojno who also lives in Croatia.

He says it is love for Bosnia.

"If you love this country and if you love the people, I mean all the people, you have to work against the politicians and then you are certainly on the right track. What they do leads nowhere," says Husejn Smajic.

In the meantime, the ceremony concludes with large tables of cevapi, a popular sausage in the Balkans.