The OutinChurch Initiative in Germany

All over Germany, meetings such as this are taking place. 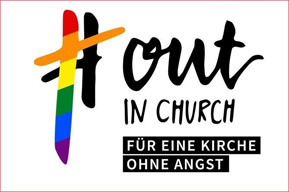 For a church without anxiety

"OutInChurch" - opening up to diversity in our church?" is the title of an information event that will take place on 23 June at 8 pm at the invitation of the parish council in the parish hall of St. Joseph, Moitzfeld.

Sabine Hengmith from Bonn, who is herself part of the queer community, will be the speaker explaining the #OutInChurch initiative and presenting the situation of queer people who are employed full-time or on a voluntary basis in the Roman Catholic Church. The official position of the church will also be presented. This exchange forum, moderated by Melanie Wielens, is intended to provide in-depth information on the topic, to get to know the different attitudes to it and to enter into conversation with each other about one's own perspective.

For weeks, flags with the words "OutInChurch" have been hanging on both church towers of the parish community. With this, the PGR wanted to make a statement that has been controversially discussed within the parish in recent weeks. Background: At the end of January, in a concerted action on a website of the initiative "#OutInChurch - for a church without fear" and in the context of a TV documentary, 125 people came out who work full-time and voluntarily in the Catholic Church and at the same time belong to the queer community. Queer is a collective term for sexual minorities, among which homosexuals are the largest group.

Among other things, #OutInChurch demands that the church labour law be changed in such a way "that living according to one's sexual orientation and gender identity" does not lead to dismissal. With their initiative, their representatives drew public attention to the situation of non-heterosexual people in the Catholic Church.

In the meantime, a number of dioceses have publicly promised not to impose any consequences under labour law on homosexual or civilly remarried employees. Dismissal on the basis of personal lifestyle is thus ruled out. The German bishops also announced that they would revise church labour law.