Does Pope Francis intend to change Church teaching on contraception?

Will the Humanae vitae Encyclical be "reformed"?

Some signals from the Pontifical Academy for Life have recently appeared to question the content of Pope Paul VI's 1968 encyclical Humanae vitae.  Are we heading towards a reform of this text, especially concerning contraception?

The pill, condoms and in-vitro fertilisation are once again causing a stir in the world of Catholic theology.  These stirrings follow several publications from the Pontifical Academy for Life referring to Humanae vitae.  Paul VI's encyclical, which condemns the use of artificial contraception as well as unnatural means of reproduction, has been a constant bone of contention between the so-called "secular" world and the Catholic Church since its publication in 1968. 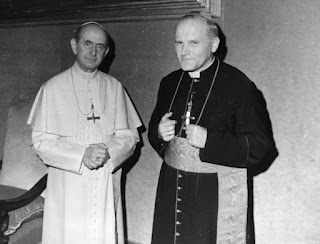 The renewed interest in these issues began in early July 2022 with the publication of Theological Ethics of Life.  Scripture, Tradition and Practical Challenges.  The text, which includes papers presented at a conference sponsored by the Academy in 2021, quickly came under fire.  Mainly because it contains contributions from some theologians arguing for a distinction between moral norms, such as the Church's condemnation of artificial birth control and the specific pastoral application of those norms, notes the US media outlet Crux.  These experts suggest that, in certain limited circumstances, contraception or artificial reproduction can be justified.

The Academy defended the book by pointing out that its role was to facilitate dialogue between the leading theological thinkers of the day on contemporary issues of major concern.  "Rather, we wanted to bring together different opinions on even controversial subjects, offering many points for discussion," explained Archbishop Vincenzo Paglia, President of the Pontifical Academy for Life, speaking to Vatican Radio.  Some, meanwhile, said it was inappropriate for an official Vatican body to include voices questioning some of the Church's fundamental moral teachings.

"No Pope has ever proclaimed the Church's moral teachings on lying or stealing to be 'infallible'.

The debate escalated in early August, following a message posted on the official Twitter account of the Pontifical Academy for Life.  It stated that Pope Paul VI's encyclical Humanae Vitae was not covered by the doctrine of papal infallibility.  This means that it can be modified.  The tweet stated that this had been confirmed by Archbishop and moral theologian, Ferdinando Lambruschini at a press conference on 29 July 1968 presenting the Encyclical to the press.

A discussion that is in fact nothing new, notes Crux.  The exact level of authority that Humanae vitae possesses, and thus the possibility of opposing it while remaining a good Catholic, was a subject of controversy as early as 1968.

Most conservative theologians answer this question in the negative.  They insist that a piece of doctrine does not need to be formally declared infallible to be so.

Such statements are generally reserved for matters of faith, not morals.  The dogmas of the Immaculate Conception and the Assumption of Mary are the only examples of formal assertions of infallibility in the last 150 years.  Conservative theologians point out that no Pope has ever proclaimed the Church's moral teachings on lying or stealing to be "infallible", which does not mean that they are licit.

Liberal" theologians, on the other hand, point out that if a Pope since Paul VI had wanted to declare Humanae vitae infallible, he could have done so, which has not happened.  They also point to John Paul II's 1998 apostolic letter Ad Tuendam Fidem.  The document extends the scope of infallibility to include the "ordinary and universal magisterium", that is, what is taught by popes and bishops even without a solemn declaration.  Yet this letter makes no reference to contraception, nor does the accompanying commentary, written by Cardinal Joseph Ratzinger, the future Benedict XVI.

So the status of Humanae vitae is still widely disputed.  But does the fact that a Papal document is not covered by infallibility allow it to be reformed?  A possibility not favoured by John Grabowski, Professor of Moral Theology and Ethics at the Catholic University of America.  It seems to me that the Pontifical Academy for Life wants to treat this as an open question, as many saw it in 1966," he told The Pillar.  But this is not 1966.  We have not only the authoritative teaching of Paul VI, but also the entire magisterium of John Paul II - not to mention the subsequent reaffirmations of Benedict XVI and Francis.  According to the theologian, "while the teaching may not - yet - have been definitively proposed by means of a solemn judgement (that is, invoking papal infallibility), the substance of the teaching is a constant and established doctrine.

But beyond these different views on the legitimacy of a reform of the Encyclical, is such a step really on the agenda?  In any case, small discreet signals have fuelled the controversy.  Notably the phrase slipped in during an interview by one of the members of the Academy, Rodrigo Guerra, according to whom "it is necessary to go beyond Humanae vitae".  According to the Secretary of the Pontifical Commission for Latin America, Pope Francis wants the Church to understand "that moral theology must learn to look more closely at the real life of people".

A commentary on Theological Ethics of Life in the 2 July edition of the influential Jesuit journal La Civiltà Cattolica further suggests that Pope Francis could write "a new Encyclical or Apostolic Exhortation on Bio-ethics, which he could perhaps title Gaudium vitae (The Joy of Life)". The precision of the title was taken in some Vatican circles as a serious indication of the existence of the project.

On the aeroplane back from Canada in late July, Pope Francis was asked about contraception. He replied that "when dogma or morality develops, it is a good thing (...) A Church that does not develop its thinking in an ecclesial sense is a Church that is going backwards".  However, he added that he was talking about a development "in the same direction".  A somewhat "cryptic" answer, which did not put an end to speculation.

Not in the Francis files?

John Grabowski does not believe in a process of revision of the encyclical.  He believes that Archbishop Paglia did have a draft document on life issues, a sort of 'update' of Evangelium vitae (1995), which the Holy Father could promulgate in his own name, or simply approve.  "My understanding is that Pope Francis has rejected both options," notes the American theologian.  He told them instead to have an academic symposium on these issues and that he could contribute a foreword.

The American theologian also points out "that Pope Francis has spoken strongly and consistently in favour of the teaching of his predecessor St Paul VI [against artificial contraception], praising his courage in responding to the neo-Malthusianism of his day."