The Parma local edition of the daily La Repubblica, which Pope Francis is known to enjoy reading, reported on 16 August the appointments and imminent transfers in the diocesan clergy. Bishop Enrico Solmi of Parma traditionally announces these on 15 August. The latest changes have since been published on the diocesan website. They also affect Monsignor Matteo Visioli.

Visioli earned a doctorate in canon law after studying fundamental theology at the Pontifical Gregorian University. He then became Episcopal Vicar in his home diocese, took on tasks for the Italian Bishops' Conference, was Director of the Inter-Diocesan College for Religious Studies and taught canon law at the Marcianum in Venice. In 2017, Pope Francis called him to Rome and appointed him Under-Secretary of the Congregation for the Doctrine of the Faith.

Now he has been appointed pastor of three parishes and moderator of a fourth in the mountains of the Apennines by the Bishop of Parma. What happened?

Arrest for being a clan member

"Our sources in high places confirm," says the tradition-bound site Messa in Latino, "that Msgr Visioli's dismissal was because he was in the same clan as Monsignor Giacomo Morandi, who was also promoted away from Rome.

Monsignor Morandi had been appointed Secretary of the Congregation for the Doctrine of the Faith in 2017, at the same time as Visioli. Last January, he was abruptly removed from Rome when Pope Francis appointed him as the new Archbishop of Reggio Emilia and Guastalla. His position was not filled as Francis reformed the Congregation for the Doctrine of the Faith in February, merging it into two sections and appointing a separate secretary for each.

Archbishop Morandi had been sacked over allegations that he wrote the famous responsum against the blessing of gay couples on 15 March 2021. In it, the Congregation for the Doctrine of the Faith stated the impossibility of blessing a form of sin. With this negative answer, the Congregation for the Doctrine of the Faith any innovation in Church teaching on homosexuality (Dariusz Oko), which is opposed above all by  priests of the German-speaking world, supported by some Bishops. Pope Francis, however, then left his own Congregation for the Doctrine of the Faith out in the cold so as not to mess with the German Bishops' Conference and those advocating a change in teaching on these matters. Santa Marta distanced itself from the responsum immediately after it was published, and Monsignor Morandi was just as quickly mentioned as a possible candidate for the Bishop's chair in Turin. His days in Rome were numbered.

Because Monsignor Morandi had dared to thwart the Papal plans - that is, had not grasped intuitively what Pope Francis does not say but wants - he was promoted away from Rome a few months later - and with him, now with a time delay, Monsignor Visioli. Messa in Latino writes on this:

"The climate of South American dictatorship that prevails in the Roman Curia is becoming increasingly clear: suspicion or proximity to someone who has fallen from grace is enough to be dismissed without explanation."

The Rite handed down as a career-ender 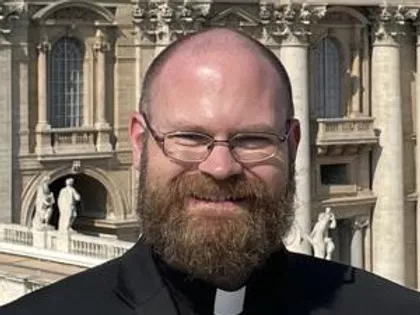 Tait C. Schroeder is a priest of the Diocese of Madison. He first studied sacramental theology in Rome at the Pontifical Athenaeum of Sant'Anselmo and then earned a doctorate in canon law at the Pontifical University of Santa Croce. Since then, he has earned a reputation as a canon lawyer based on his excellent principles. At the beginning of August, Schroeder was still a speaker at a canon law conference in Wisconsin in the USA together with Cardinal Raymond Burke - a proximity that was probably not welcomed in Santa Marta either.

The Apostolic Nunciature in the USA, where Archbishop Carlo Maria Viganò is no longer Nuncio but his successor Archbishop Christophe Pierre, then hastened to inform Rome that Schroeder, according to Messa in Latino, "was guilty of the terrible crime of celebrating the Tridentine Holy Mass". In fact, the priest from the USA had celebrated in the Traditional Rite for groups of pilgrims visiting Rome.

"This hint forced Father Schroeder to resign from the office he had just received."

nazareusrex said…
A "Congregation for the doctrine of the faith" that allows a manifest heretic like Bergoglio who does not profess the Catholic faith but has a Masonic, liberal and anti-Catholic agenda, to get away with it, is a false congregation that only has a name Catholic but does not exercise the function of safeguarding sound Catholic doctrine in the Church, it does not have the function of "promoting and protecting sound doctrine on faith and (moral) customs". So the logical conclusion is that Bergoglio uses the accomplices he puts in charge of the falsified congregation of the doctrine of the faith to continue his fraudulent papacy.
7:47 PM

Ignatius, Cornwall said…
TRUE: Is the pope a Catholic? Ans: NO!!

From Fr. Khouri said…
We just have to be faithful to the Tradition and pray this tribulation ends soon.
4:35 PM

From Fr. Khouri said…
The structure of the Church as exercised over the last thousand years, with the pope being untouchable and his minions being henchmen, whether it be a faithful pope or not has all come down to haunt us today. The papacy is of divine origin, the way it has been exercised is not.
4:40 PM