Maria 2.0 Initiative wants to update the Virgin Mary and the Church

According to a media report, the Vatican Congregation for the Doctrine of the Faith is dealing with the reform movement "Maria 2.0" founded in Münster.

The "Frankfurter Allgemeine Zeitung" (FAZ) reports on its website that the background is "a letter from Cologne" and protests against Cologne Cardinal Rainer Maria Woelki.

For its part, "Maria 2.0" in the Rhineland sent a letter to Pope Francis last week asking for a visitation of the Archdiocese of Cologne. 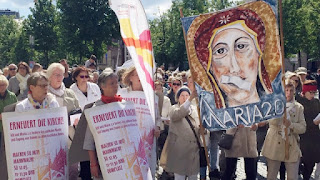 According to a media report, the Vatican Congregation for the Doctrine of the Faith is looking into the "Maria 2.0" reform movement founded in Münster. The "Frankfurter Allgemeine Zeitung" (FAZ) reports on its website that the background is protests by Christian women's rights activists against Cardinal Rainer Maria Woelki of Cologne for not publishing an expert opinion on the handling of abuse in the Archdiocese of Cologne. According to the FAZ, the Vatican had received "mail from Cologne" on the matter. A spokesman for Woelki had nevertheless stated that the Cardinal had "not denounced Maria 2.0".

A week ago, however, "Maria 2.0" in the Rhineland had sent a letter to Pope Francis asking for a visitation by a Vatican representative "so that you can get an idea of the situation and we can look for new ways of working together". The FAZ does not mention this initiative, nor whether the Vatican's "preoccupation" with a "letter from Cologne" means a preoccupation with this very letter from "Maria 2.0".

"Maria 2.0" and the Archdiocese of Cologne

In December 2020, the Women's Reform Group with the Catholic German Women's Association in the Archdiocese of Cologne was the initiator of a digital demonstration demanding personnel consequences from the Cologne diocese leadership. Patrick Bauer and Karl Haucke, the former spokespersons of the Victims' Advisory Council in the Archdiocese of Cologne, had also demanded that Cardinal Woelki break his silence and place the processing and assessment of abuse in the archdiocese completely in independent hands.

Finally, in November 2020, "Maria 2.0" had demonstrated with a "confession mobile" in front of Cologne Cathedral in favour of publishing the Expert Opinion of the Munich law firm Westphal Spilker Wastl, which had been kept under lock and key. Those responsible should admit their guilt, demanded the theologian, Maria Mesrian.

"Maria 2.0" had been founded in 2019 by Lisa Kötter and Andrea Voß-Frick, among others, in the Holy Cross Parish in Münster. It started with a church strike by women protesting against the exclusion of women in the Catholic Church and the lack of processing of the abuse scandal. The movement has since spread far beyond the Diocese of Münster and North Rhine-Westphalia.

The two founders have since left the church.

The Maria 1.0 Initiative was founded by conservative and traditionalist in response to the Maria 2.0 Initiative.  They object to the intrumentalisation of the sexual abuse scandal to reform the church beyond recognition