The Council did not deal with them - and neither did the Church centuries before. Then, on 15 August 1972, Paul VI abolished tonsure, the so-called minor orders and the sub-diaconate. For today, a solution to the women's question? 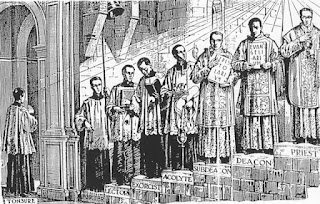 When Pope Paul VI presented the first edition of his reformed Missale Romanum (Roman Missal) in 1969, it also described the liturgical tasks of the sub-deacon. The sub-deacon had to read from the New Testament, assist the deacon and the priest in preparing the altar - and he belonged to the higher clergy. This was to change with the document "Ministeria quaedam", which was published 50 years ago, on 15 August 1972. Paul VI broke with a thousand years of tradition and abolished sub-deacons in the Latin Church, as well as the minor orders that preceded them.

The office of deacon is one of the oldest in the Church and stands first of all for social responsibility. The term deacon is derived from the Greek word "diakonos" and means servant or helper. In the Roman Church of the first centuries, deacons worked in caring for the poor and sick or as assistants to the bishop in church administration and worship.

The Second Vatican Council (1962-1965) had developed the sacramental, tripartite Sacrament of Orders in the Church Constitution "Lumen Gentium". The higher but non-sacramental ordination level of sub-deacon no longer seemed to fit in. The other lower ordination levels of ostiarius (doorkeeper), exorcist, lector and acolyte were already no longer of practical relevance in church life.

Paul VI therefore decided to tie entry into the clergy to ordination to the diaconate. The lower ordinations were now replaced by assignments as lector and acolyte, through which, in the wake of communio-ecclesiology, lay people were also to become visible in divine service. The new ministries were to fulfil in perpetuity the tasks previously held by the sub-deacon in the Divine Service - but on the basis of the qualification from baptism and confirmation, not as an "outflow" of the sacrament of ordination. 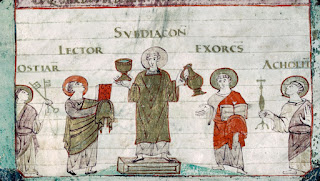 Nevertheless, until Pope Francis' motu proprio, "Spiritus Domini" (2021), the ministries were reserved exclusively for men - and Paul VI even left it up to the Bishops' conferences whether to continue to call the acolyte a sub-deacon. The obligation that candidates for ordination to the diaconate and priesthood must have previously received the commissions also refers to the ancient tradition of the lower ordinations. Pope Francis took up the innovation of his predecessor in various respects, especially in the matter of the "role of women" in the Church. In 2021, he opened the "ministeria" permanently to women. Previously, therefore, only candidates for ordination as deacons and priests were eligible for the commissions.

Shortly after the opening of the commissions to women, the decree "Antiquum ministerium" followed, with which the Pope created the ministry of catechist - this time in an emphatically lay manner: candidates for the sacrament of Holy Orders are not to receive it. Pope Paul's break with the tradition - and not least the Churches of the East - of seeing the ecclesiastical ministries as an "outflow" of the Sacrament of Orders is seen by Francis as a way of making women more visible in the Church. At the same time, he wants to make clearer the difference between "ordained ministries" for men only and "non-ordained or lay ministries" for all.

With the establishment of the ministry of catechist, Francis has created an official framework and at the same time instructed the Bishops' conferences to develop worldwide for potential candidates "the necessary training path as well as norms and criteria for access". Whether the expansion of "institutions" will gain practical relevance in the life of the Church remains to be seen. In practice, most local churches have had women as lectors and communion helpers for some time. Catechesis is often in the hands of women in many parishes.

With the liturgical framework now created for a commissioning, Francis is honouring this commitment. In Germany, the response to the Pope's measures has so far been rather restrained. The solution to the "women's question" seems to be imagined differently.