Bishop was enabler for abuser

Sexual abuse in the Diocese of Münster

According to a study by the University of Münster, former Bishop Hermann-Josef Spital of Trier is also implicated in the abuse scandal in the Catholic Church - because he did not act. 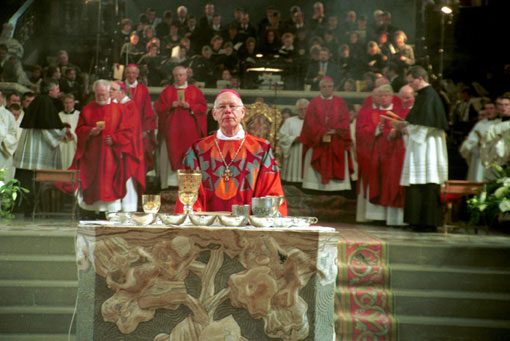 During his time as Vicar General in the Diocese of Münster until 1980, Hermann-Josef Spital had knowledge of sexual abuse of priests from the diocese there in individual cases. This is proven by a study presented by scientists in Münster on Monday.

The role that Spital, who has since died, played in the cover-up of abuse cases can no longer be precisely determined due to the lack of written records. What is certain, however, is that even convicted abusers were re-instated as priests and then committed offences again.

Specifically, the study mentions the case of priest, Theo Wehren, who was sentenced to probation in 1976. He had sexually abused children in 20 cases who lived in a children's home run by religious sisters.

Although Spital, as Vicar General, had been personally informed about the accusations and the sentence, there had been no ecclesiastical sanctions for the serial offender. He had only been advised to seek therapeutic help. The priest had remained in the parish after the verdict and had also continued to have access to the children of the home.

As Bishop of Trier from 1981, Spital is said to have failed to reply to the letter of a young woman who was regularly raped by a priest when she was an altar girl. Scientists at the University of Trier are currently also working on an abuse study for the Diocese of Trier. The first results are to be presented in autumn.