The oath to the Führer must not be taken

80 years ago, the Schoenstatt Father Franz Reinisch was executed: He was the only priest who had refused to take the oath of allegiance to Hitler.

As early as 1939 Reinisch had said: "The oath, the soldier's oath to the National Socialist flag, to the Führer, must not be taken, that is sinful."

Pallottine and Schoenstatt-follower Father Franz Reinisch is one of the few men - along with, for example, Franz Jägerstätter (2007) and Josef Mayr-Nusser (2017), who were beatified - who refused to take the oath of allegiance to Hitler, and paid for it with their lives. 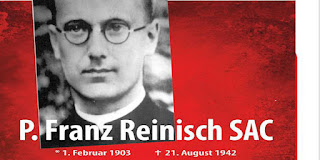 Born on 1 February 1903 in Feldkirch-Levis, Tyrol, Reinisch was ordained a priest in June 1928. He discovered his true vocation through the Pallottines in the Schoenstatt Movement. Because of his opposition to National Socialism, he was banned from preaching in September 1940: as he was not allowed to fill a parish post, he was called up for military service in 1942. Reinisch immediately declared that he did not want to take the oath of allegiance to the "Führer". On 7 July 1942 he was sentenced to death, and on Friday, 21 August 1942 - exactly 80 years ago - he was executed in Brandenburg-Görden.

As early as 1939 Reinisch had said: "One must not take the oath, the soldier's oath, to the National Socialist flag, to the Führer, that is sinful. One would be swearing an oath to a criminal.... Our conscience forbids us to follow an authority that only brings murder and manslaughter into the world for the sake of lustful conquest." He held fast to this until the end. His parents also stood by his decision.

His beatification process at the diocesan level has been completed since June 2019. The files are now in Rome. Manfred Scheuer, Bishop of Linz and Vice-President of the Austrian Bishops' Conference: Franz Reinisch's martyrdom is "in the line of the early church martyrs who said no to the emperor". As a spelling out of the creed, he too had said: "I oppose evil". I, as a Christian and Austrian can never take the oath of allegiance to a man like Hitler. There must be people who are protesting against the abuse of authority, and I feel called to this protest.

On the same day that Edith Stein was gassed in the Auschwitz concentration camp, 9 August 1942, Father Reinisch wrote down his "Death Song" in his prison cell in Berlin-Tegel, a hymn addressed to Mary about the inner freedom and dignity of the human being, which defies all persecution and even death.

"You are the great sign, full of light in the sun's glow! Flooded and shone through of God's love! I want you as a flame of love, Mary, virgin pure In the little sanctuary ignited by you.

You stand as a rose of suffering by the cross, large and silent, and say your yes to the sacrifice, because that's the way God wants it! Today, too, God is calling for a band of heroes. So offer me, O Mother, As a sacrifice of love.

O Queen of the Worlds, Command the storm of time. Crush the spawn of Satan, O victress in battle! Let me become an apostle! As a knight I stand. And dying I will smile: O dear Mother!"