Archbishop Lackner: Results from dioceses and pre-synodal assembly of the Bishops' Conference to be sent to Vatican Synod Secretariat by 15 August in German, English and Italian

"The Austria Synthesis on the Synodal Process is being finalised, will be sent electronically to the Vatican Synod Secretariat by the deadline of 15 August and will be published in mid-September." This was explained by the President of the Bishops' Conference, Archbishop Franz Lackner, in an interview with Kathpress on Wednesday with regard to the further steps of the worldwide Synodal Process. The summarised results from the synodal processes in the Austrian dioceses and the pre-synodal assembly of the Bishops' Conference in Mariazell will be submitted to Rome not only in German, but also in Italian and English, the Archbishop of Salzburg continued. 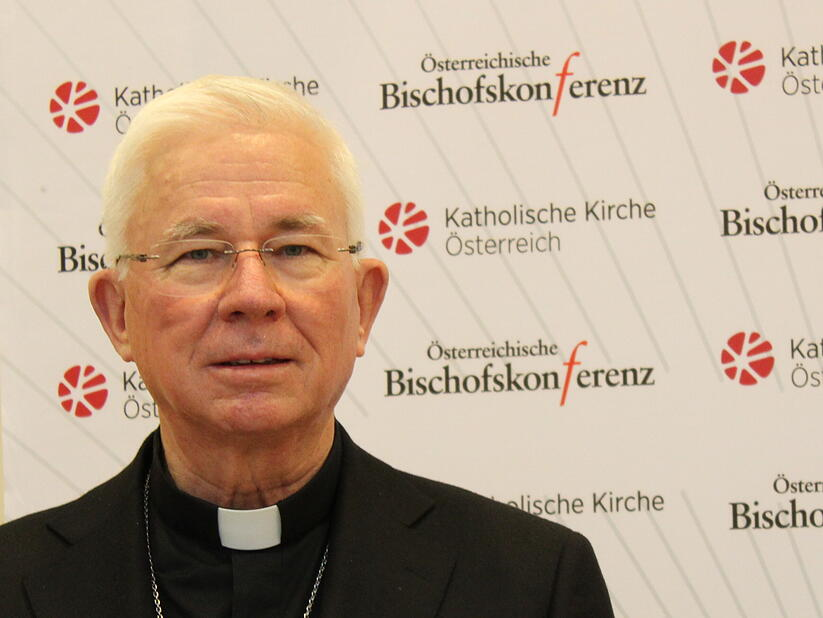 Lackner already has three reasons to say thank you: "First of all, I am grateful for the broad participation in the Synodal Process at Diocesan level. Despite the pandemic, there was a lot of feedback and very high-quality discussions in all dioceses, where listening was the main focus. A "good spirit, a lot of openness and appreciation" could then be experienced on 20 and 21 June at the pre-synodal meeting with a total of 60 people in Mariazell. "Listening, discussing and praying together was a great gift and proof of trust for the bishops," said their president.

"Special thanks" are now due to the editorial team, which in recent weeks "with a high degree of competence and independence" had produced a "precise summary" from the many contributions. The date for the publication of the Austrian synthesis around the start of school was deliberately chosen by the Austrian Synod team to enable a correspondingly broad perception, the Archbishop explained.

Pope Francis has called on Catholics worldwide to participate in the two-year Synodal Process, which will culminate in a World Synod of Bishops in Rome in October 2023, entitled "A Synodal Church: Communion, Participation, Mission". Its preparation will take place in three phases - first at the diocesan level, then at the continental level and finally for the universal Church. Religious orders, curia authorities, Catholic associations, communities and Catholic faculties are also invited to participate. The aim of this synodal process is to offer all the faithful the opportunity to "listen to one another and to the Holy Spirit", according to Pope Francis' motto.

The Austrian Bishops' Conference has welcomed and supported the Pope's initiative from the very beginning. Synodality was declared a "matter for the boss", as it were, by electing Archbishop Lackner, the President of the Episcopate, as a participant in the Synod of Bishops in October 2023. Together with a synod team, he will also co-ordinate the process at national level. In addition to "Pastoral Bishop" Josef Marketz (Gurk) and Bishops' Conference General Secretary, Father Peter Schipka, two women are also in the top group: the Viennese pastoral theologian and sociologist of religion, Professor Regina Polak and the Innsbruck Caritas Director, Elisabeth Rathgeb.

(Cathcon: I have provided links to curricula vitae which carry their own message that the Synod Team have all been picked to deliver the desired final message- all but Rathgeb and Krieger are in English- and here from the links provided

Women in the Church

Elizabeth Rathgeb, the theologian and historian is known to many as a long-time pastoral office director. Before that, she directed the St. Michael House of Education for eight years and worked in parish counselling and organisational development. In the programme she tells how she was appointed church manager against the will of the Vatican. Several times she was to be removed because she is a woman. The Caritas director reports on the role of women in the church in the programme "Auf ein Wort".

In addition, an editorial team consisting of four lay people (two women and two men) was appointed to prepare the national synthesis on the basis of the submissions from the dioceses and church institutions as well as the contributions at the meeting in Mariazell. In addition to the Secretary General of the Austrian Pastoral Institute, Walter Krieger, they are Birgit Bahtic-Kunrath from the International Research Centre (IFZ) in Salzburg, Petra Steinmair-Pösel, Rector of the Kirchliche Pädagogische Hochschule (KPH) Edith Stein, and the European Officer in the General Secretariat of the Bishops' Conference, Johannes Moravitz.