The biggest outing in the history of the Catholic Church

It was the biggest outing in the Catholic Church: a year ago, more than 100 queer employees revealed themselves in front of the camera for the ARD documentary "Wie Gott uns schuf". What has changed for them since then? 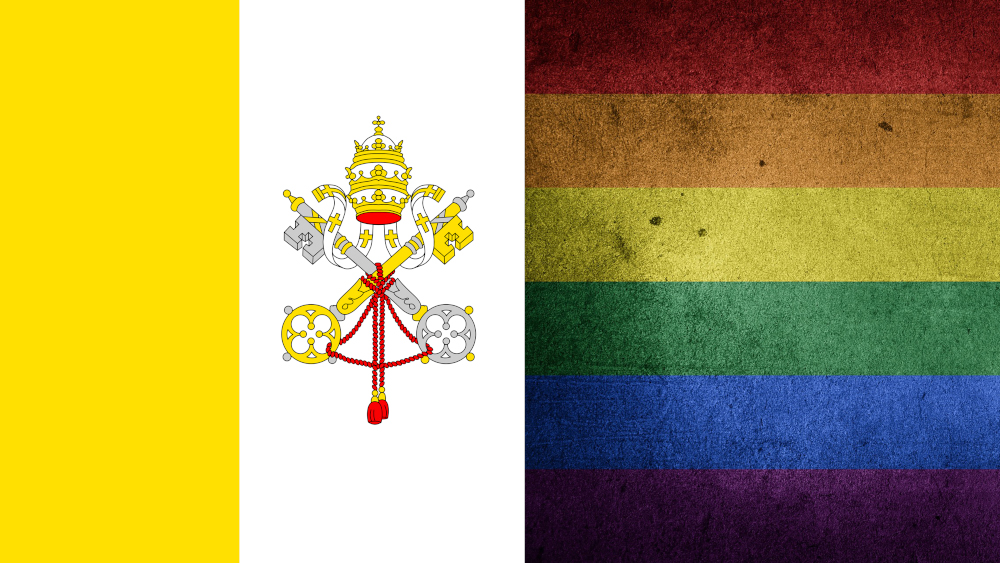 Trans woman, Charlotte nervously slides from left to right on her chair again and again, rubbing her hands together. She wears a wig and earrings. Being so open about her womanhood is unthinkable for Charlotte in her work as a chaplain in the church. "I am still very afraid of being ostracised, discriminated against and of being dismissed," Charlotte says in a brittle voice.

Eric Tilch walks with a firm step down the long corridor in the youth church, Kana in Wiesbaden. A large rainbow flag hangs outside. "I finally have to stop separating between Catholic Eric and homosexual Eric but that they belong together." As a youth education officer, he does queer youth work here.

Two perspectives of two people who are part of "Out in Church". It's been a year since they dared to go in front of the camera. Their coming out has caused a tremor in the Catholic Church.

Changes in labour law in the Catholic Church

Since the beginning of this year, a new church labour law has been in force in most dioceses: homosexuality, divorce or gender identity may no longer be grounds for dismissal in the Catholic Church. This was decided by the bishops in November. The decision is not only a reaction to the documentary, but also to staff shortages. A passage from the anti-discrimination law was taken over:

"[...] Diversity in church institutions is an enrichment. All employees can be representatives of God's unconditional love and thus of a church that serves people, regardless of their specific tasks, their origin, their religion, their age, their disability, their gender, their sexual identity or their way of life. [...]"

Source: Article 3 of the Basic Regulations of Church Service of 22 November 2022

This takes away Eric Tilch's fear. Because his fear of losing his job at the Limburg diocese as a homosexual man remained even after the documentary. "Until now, the approval of me as a person has always been characterised by the diocese leadership. But what if that position changes? That was my big fear." With the new labour law, Tilch finally has legal certainty.

Specifically, Articles 4 and 5 of the Basic Order were deleted. The consequence: the private lives of the approximately 800,000 employees are no longer any concern of the church. This is so, at least in theory, says canon law expert, Thomas Schüller. People who did not fit into the male-female pattern or who did not love in different sexes would nevertheless have had the experience of being permanently discriminated against in the Catholic Church. "This worry cannot be taken away from them now, because the factual behaviour is often different."

The game of hide and seek continues

Trans woman Charlotte knows this worry well. She wants - as in the documentary - to remain unrecognised. Charlotte still goes to work every day in men's clothes. Here, everyone only knows her male name. "I would love to wear a skirt, show my breasts, but I can't do any of that." For her, the game of hide and seek continues. "All it takes is one person I've confided in to betray me. Then I'm outed." The fear of being discovered is Charlotte's daily companion.

Charlotte wants to remain unrecognised. Her fear is too great.

Nevertheless, doing her job outside the Catholic Church is not an option for Charlotte. "I love my church, I love my faith, but I finally want to be Charlotte."

A law alone is not enough

Eric Tilch also realises that a piece of legislation alone will not change the thinking of everyone in the Catholic Church. "Unfortunately, there are still persons who preach something that scares me because it rejects me, because it doesn't let me be part of this church," he says with trepidation in his voice.

The stories of the others who came out in the ARD documentary also make him doubt: To what extent can he change something in the church? Or to what extent does he support a system that does not want him?

The "Out in Church" initiative, to which Charlotte, Eric Tilch and around 100 other contributors to the documentary belong, has other demands. For example, that homosexual couples be allowed to be officially blessed.

So the new labour law is only a partial success for queer people in the Catholic Church - a milestone on a long road to real equality.