Interview. Order of Malta, Fra' Dunlap: no reduction in "sovereignty" by the Pope

Fra' John Dunlap, 65, from Canada, is the Lieutenant of the Grand Master who will lead the Order of Malta (SMOM) until the Chapter General scheduled for January 2023. In June - after the untimely death of his predecessor, Fra' Marco Luzzago - he was appointed to this post by Pope Francis, who on 3 September promulgated the new Constitution, the result of a five-year reform process, after a serious internal institutional crisis had opened in 2017 with the clash between the then Grand Master Matthew Festing and Grand Chancellor Albrecht von Boeselager. We meet the Lieutenant on the eve of his meeting at the Quirinale with Sergio Mattarella, who will receive him today along with other members of the Sovereign Council, including the Italians, Riccardo Paternò di Montecupo (Grand Chancellor), Fra' Alessandro de Franciscis (grand hospitaller) and Antonio Zanardi Landi. The Order's ambassador to Italy, Stefano Ronca will also be there. This is the third visit to the Quirinale in the last twenty years by the Order of Malta's highest office holder to a President of the Italian Republic. The last was that of Grand Master Fra' Matthew Festing also to Mattarella on 27 October 2016. The visit of the Grand Master, Fra' Giacomo della Torre del Tempio di Sanguinetto scheduled for 13 January 2020 was cancelled at the last moment due to the aggravation of the Grand Master's health conditions. This is the first meeting of the new Grand Master's Lieutenant and the Order's high officials with a foreign Head of State. 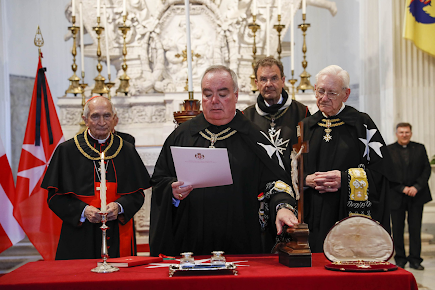 Fra' John, the new Constitution has also been met with criticism from those who see in it a loss of sovereignty on the part of the Order

We have always been a religious order under the authority of the Pope. And in this nothing has changed. Sovereignty is a functional aspect of our reality. And even in this there has been no change. We have full diplomatic relations with 112 countries and none of them have broken them, just as none have broken them with the Holy See. The Pope always wanted to value our being a religious order but he never questioned the fact that we retained the sovereignty necessary to carry out diplomatic activity.

A novelty in the Constitution that has caused debate is the one that sees the Grand Master elected ad tempus (maximum two ten-year terms) and no longer for life.

This is the Pope's decision. But the Pontiff has also told us that this point can be changed in the future, if we wish. Perhaps by stipulating that the Grand Master who has reached a certain age must, like bishops, submit his resignation, which would become enforceable after acceptance by the Sovereign Council.

Pope Francis not only promulgated the new Constitution but also radically renewed the high offices of the Order, appointing a provisional government in which there are no longer any German representatives. Does this have special significance in light of the events of recent years?

It was the Holy Father's decision. However, the current one is a provisional government, which will last until the next Chapter. On that occasion I see no reason why German representatives cannot be elected. The German aspect is a very important reality in the Order.

The requirement of four quarters of nobility for professed candidates to become Grand Master has also been abolished.

To tell the truth, the Holy See had been asking for this since the 1960s. It was the order that did not comply with this request. I have no problem with the presence of nobles in the order, but this cannot be a preferential element to hold a certain office.

Is the vote for women a novelty?

It is a novelty that it is expressly provided for in the Constitution. But it has already happened in the past that some ladies, who altogether make up 27% of the members of the Order, participated in the election of the Grand Master.

Has the institutional crisis you have gone through diverted you from ordinary activities?

Absolutely not. This year, for example, we did a great deal of aid work in Ukraine. Also for this service, our employees increased from 46,000 to 52,000, in addition to the 90,000 volunteers and 13,000 members of the Order. But we have also continued to help refugees and migrants - especially in Turkey, Lebanon and Syria - and we have been on the front line, alongside the poorest, in dealing with the pandemic. The Order is also highly respected in Muslim countries, where we are the only ones allowed to display the cross.  In Bethlehem, we run the only children's hospital with an intensive care unit for newborns in the region. Almost all the babies treated are Muslims. The Order also has full diplomatic relations with other countries with an Islamic majority such as Morocco and Jordan.

What do you see as the Order's main need?

My prayer is that religious vocations will increase that there will be a sufficient number of professed for the Order's needs.

Are there positive signs in this regard?

Yes, thank God. In my recent meetings in London, Prague and Assisi, I met several people who said they were willing to begin a formation programme to be admitted to the professed. In this regard, together with the Cardinal Delegate Silvano Tomasi, we have begun to look for a building here in Rome to be used as a house of formation.

What is the feeling with which you go to visit President Mattarella?

We met with the President on the day of John Paul II's beatification. On that occasion, he congratulated me on my appointment as Lieutenant and thanked me for the co-operation between the Order and the Italian State. A few days later the welcome invitation arrived.

The Order of Malta: what it is

A lay religious order of the Catholic Church and subject of international law, the Sovereign Military Order of Malta has diplomatic relations with 112 states and the European Union and has permanent observer status at the United Nations. It operates through 11 priories, 48 national associations, 133 diplomatic missions, an international relief agency and 33 relief corps. Its commitment, says its official website, is to protect human dignity and to assist those in need, regardless of their origin or religion.