Will the Pope name lay and female Cardinals?

The "I am the Church" Pope

Many of the new cardinals will one day elect Pope Francis' successor. When that will be is completely open - also because Francis is not addressing an overdue problem: what happens if a Pope becomes incapacitated or resigns? 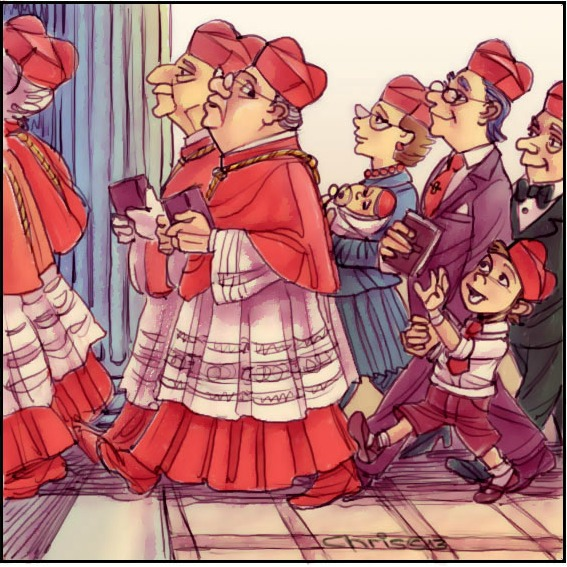 For the first time in a long while, eyes from all over the world will once again be on Rome this weekend - closer to St Peter's Square, where Pope Francis will induct 20 men into the College of Cardinals on Saturday. Sixteen of them are younger than 80, which means that they will increase the number of cardinals who will one day elect Francis' successor.

When this will happen is written in the stars. The Jesuit, Jorge Mario Bergoglio, who was the first Latin American to be elected Pope in 2013, will soon be 86 years old. Last year he had to undergo an intestinal operation and is now in a wheelchair.

Even more severe physical and increasingly mental impairments had not prevented his predecessor Pope John Paul II from clinging to the office until death. His successor, Pope Benedict XVI wanted to do things differently. In the late winter of 2013, the first German to occupy the chair of the Bishop of Rome in 500 years renounced the papal office. In the meantime, he has been a self-proclaimed "Papa emeritus" longer than he had been Pope.

A thick veil still hangs over the motives for his resignation. The only thing that is certain is that the forces within the Curia behind the "Vatileaks" did not shy away from investigating even Joseph Ratzinger's private sphere. What was in the investigative report by three Cardinals, which Benedict handed over to his successor at the time, remains one of the Vatican's best-kept secrets to this day. In any case, Francis did not feel compelled to draw any drastic personnel consequences in order to break up mafia-curial networks and weaken male-bonding structures.

Other changes were a long time coming. Until this summer, the Pope took his time to reform the Curia - despite the fact that he had been elected by many cardinals in 2013 in the hope that he would curtail the omnipotence of the Curia and rebalance the relationship between the local churches and the Roman centre in favour of the former.

Whether the reform document "Praedicate Evangelium" will live up to these expectations cannot be assessed. This is mainly due to the sphinx-like habitus of the Pope himself. It is just as difficult to lead with whispering hints as with an irritatingly playful approach to the norms of the Church's book of law. In case of doubt, the law is whatever suits Francis and his entourage. Therefore, one should not give anything to declarations of intent about better cooperation between the individual curia authorities or about strengthening the competences of bishops' conferences. The power to define the magic word "synodality" also lies exclusively with the Pope.

The logic of this rule also corresponds to the fact that in the more than nine years of his pontificate Francis has not found it necessary to tackle a problem that has been overdue for decades: the procedure in the event of a pope's incapacity or resignation. It may be that Francis summoned all the members of the College on the occasion of the creation of new cardinals in order to make arrangements known for the case that he would be equal to Benedict or that a power vacuum at the head of the Church would be imminent in the event of acute illness.

But even if the pope wanted to get the cardinals in the mood for the next conclave this way: Francis has so far not changed one iota of the fact that a pope is accountable to nothing and to no one - including the treatment of bishops and cardinals who, in what he calls a "field hospital", are less healers and comforters than bunglers, charlatans or gravediggers.

Another manifestation of geronto-clericalism is the selection of new cardinals. Laymen, even women, are still not ruled out from the circle of papal electors so far. If Francis were to break with this tradition, he would make history. I wonder if this is what he wants. After all, the Argentinean has long since broken with the classic meritocracy, according to which Bishops of powerful or even just tradition-rich dioceses, especially in Europe, automatically received the cardinalate. In keeping with the motto "Tonga instead of Turin", "his" Cardinals mainly come from the spatial periphery of the Church and/or work in places where the crises of the world are concentrated as if in a burning glass.