Vociferous criticism of Pope for silence in the face of evil

On Friday, the anti-government Bishop Rolando Alvarez was arrested in Nicaragua. Now there is growing criticism that Pope Francis has not yet taken a clear position on the case. 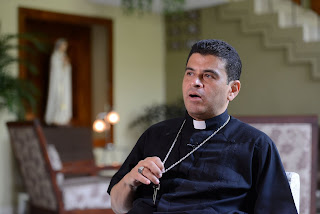 While the police cordoned off the area outside, Bishop Rolando Alvarez and some of his companions celebrated Mass in his church in Matagalpa. The encirclement of the Nicaraguan government critic lasted more than two weeks. His fate caused an international sensation. A picture of him on his knees praying for mercy for the armed police officers went around the world. On Friday, the regime finally struck: the Bishop's house was stormed and the officers took Alvarez and several other clergy away in a convoy of cars. According to local media reports, the Bishop is now under arrest in the capital Managua. The other priests are said to have been taken to a prison. In a terse statement, the authorities cited "destabilising activities" as the reason.

Only after much hesitation did the Pope comment on the latest events in Nicaragua on Sunday. However, he remained vague and non-committal, and during the noon prayer he called for an "open and honest" dialogue. He was following the situation in the Central American crisis country with "concern and pain", Francis said. Bishop Alvarez remained unmentioned. With this restraint, the head of the Church from Argentina caused some surprise. While the Latin American Bishops' Council CELAM and many national Bishops' conferences of the Church in South America found clear words, the Pope's diplomatic statements seem conspicuously toothless.

Meanwhile, prominent voices criticising him are increasing. "It's hard to say which is more scandalous: Nicaraguan dictator Daniel Ortega's decision to shut down seven Catholic Church radio stations and order the house arrest of a bishop and his aides, or Pope Francis' complete silence on these attacks on his own people," Argentine Pulitzer Prize winner and CNN journalist Andres Oppenheimer recently wrote for the Miami daily El Nuevo Herald.

Nicaraguan-born Bianca Jagger, ex-wife of Rolling Stones boss Mick Jagger and today a committed human rights defender, called on Francis to take a clear stand and "not abandon his bishops and priests". This applies "especially to Bishop Rolando Alvarez, whose life is in danger", Jagger told journalists in London a few days ago.

Mexico's ex-president Felipe Calderon (2006-2012), together with other former heads of state from Latin America, also voiced criticism: At the moment, the Nicaraguan dictatorship is raiding churches, kidnapping parishioners and people seeking protection. A strong condemnation of these incidents by democratic governments and especially by Francis is urgently needed. The "barbarism" must be stopped, Calderon wrote. He backed up his tweet with a video showing Nicaraguan security forces entering a church. Lawyer and secretary general of the Independent Nicaraguan Association for Human Rights (ANPDH), Alvaro Leiva, wrote a letter specifically to the Pope, noting, "There are few things as deafening as silence."

Why the top representative of the Catholic Church did not speak out at all at first, and then only very cautiously, is unclear. A Latin American church expert suspects that the Archbishop of Managua, Cardinal Leopoldo Brenes, asked Francis to exercise caution so that the situation would not escalate further. At the beginning of the month, it became known that the Sandinista government of Daniel Ortega in Nicaragua had closed down half a dozen radio stations in the diocese of Matagalpa. The reason given by the telecommunications authority was the lack of a broadcasting licence. In addition, the judiciary accused local bishop Alvarez of incitement to violence and sedition.

Nicaragua: Crisis with nationwide protests since 2018

Since the end of 2018, around 1,200 non-governmental organisations in Nicaragua have been deprived of the legal basis to continue their work, according to media reports. Church organisations or organisations close to the church are also affected by the banning measures. The figures are based on a database created by the portal "Confidencial".

Nicaragua has been experiencing a crisis since 2018 with nationwide protests against the leftist Ortega government. Since the beginning, around 350 people have died and thousands have been injured. Nicaragua's church, human rights activists and independent media have repeatedly criticised the rulers' violations of the law in harsh terms.