Schweinhütt - The same Easter Mass every year?  That has always been too boring for parish vicar Andreas Artinger. "In my last parish in Ruhstorf an der Rott (Passau district), I always organised the Easter Mass a little differently for 20 years," says the 63-year-old.  He thinks like the singer Pink in her song "God is a DJ": If God is a disc jockey, life is a dance floor. 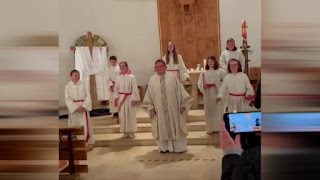 Artinger has been serving the Lower Bavarian parish association of Regen-Langdorf (Regen district) for 10 years - and this year, too, he has come up with something to make Easter Mass an entertaining experience for everyone.  "For me, it's about making the liturgy lively," says the priest.  He wants to creatively expand the well-known Easter traditions.  So the whole Mass became a production of light, music and dance.  An illuminated altar cross, timpani beats and table fireworks.

"The whole service moved towards the dance," says Artinger. To the song "Sing Hallelujah!" by Dr Alban from 1993, Artinger studied a choreography with his altar boys.  Guided by a professional dancer, they prepared the performance.  In the end, it was a video of the dance that the small Parish of Schweinhütt spread on Youtube far beyond the borders of Lower Bavaria. On Youtube alone, the video "Easter Dance 2022 Schweinhütt" already has almost 50,000 views.

"I was of the opinion that this would remain something rather regional," says Father Artinger. Nevertheless, he is happy that he was able to spread Easter joy with the video of his dance and that the Church is once again in the public eye with positive headlines instead of the abuse scandal.  "I am happy that the event gets so much positive feedback."

Even during the Easter Mass, he said, it was immediately noticeable that people were happy about the creative liturgy.  "They jumped up, joined in, it was a great Easter atmosphere." In the days that followed, Andreas Artinger could hardly restrain press enquiries. BR24, katholisch.de, Passauer Neue Presse - all wanted to know more about the eccentric Easter celebration.

The comments on Youtube manifest the joy of many people about a breath of fresh air in the church.  One user writes: "The church would need more parish priests as generous and open-minded as Father Artinger." "Let's Dance, Father!  Oh, if only there were more priests like this!" another user comments.  The vast majority of comments are positive.  Only a few comments see the dance performance as a mockery of the Holy Mass and wish for traditional Easter customs.  One man, for example, wrote: "D'leid weand gottlos-the song is godless.  Apostasy and corruption of morals are returning."

Father Artinger: "Last week I was asked about it everywhere".

In the village and his close environment, Artinger was also overwhelmed with feedback.  Old acquaintances contacted him, letters from his old parish reached him, the telephone rang.  "Last week I was approached everywhere about it." A good week after Easter, the hype is now slowly dying down.  And Andreas Artinger is already looking forward to next year.