Abuse study: Bishops criticise indiscretion
The German bishops want to confront the results of their abuse study. These are "oppressive and shameful". Nevertheless, they are criticising the premature publication.  This is because the planned counselling provision for the victims is not yet available. 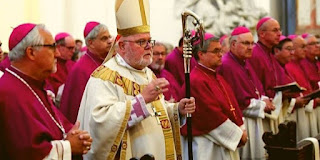 The German Bishops Conference regrets that the results of their study on sexual abuse have become known ahead of time as a result of indiscretion. "Especially with regard to the victims of sexual abuse, the irresponsible announcement of the study is a serious blow," said Bishop Stephan Ackermann, the abuse representative of the Episcopal Conference, according to a press release on Wednesday.

The bishops would face up to the content of the study, according to Ackermann. "We know about the extent of the sexual abuse demonstrated by the study's findings, which is depressing and shameful for us." He called for a "responsible and professional working through" of sexual abuse in the church. The study is a measure "that we owe not only to the Church but above all and first and foremost those affected," said the bishop.

"Spiegel" and "Zeit" have published contents in advance

The on-line issues of "Spiegel" and "Zeit" reported on the central statements of the study on Wednesday, two weeks before the planned presentation of the study during the General Assembly of the Episcopal Conference in Fulda on September 25. According to Ackermann, the bishops knew about the content.  However, the Bishops' Conference intends to adhere to the planned release date, regardless of the indiscretions, according to Ackermann.

Ackermann pointed out that the Episcopal Conference wanted to accompany the publication of the study on 25 September with a counselling offer for those affected. For this purpose, a hotline should be set up for people "who are upset because of the reporting and need to talk to someone". However, due to the early release of the study results, this service is not yet ready. Ackermann asked before the activation of the hotline for contact to be made via the telephone and Internet chaplaincy or to the Abuse Prevention Officer in the diocese.

The new Bishop's Abuse Study documents a total of 3,677 victims who were abused by at least 1,670 priests and religious in the years 1946-2014. The study further states that the researchers did not assume that "the sexual abuse of minors by clergy of the Catholic Church is a past topic that has since been overcome".

The study was created by a research consortium led by the Mannheim psychiatrist, Harald Dreßing. Also involved are the Institute of Criminology and the Institute of Gerontology at the University of Heidelberg and the Department of Criminology at the University of Gießen. The aim of the study, in which all 27 dioceses in Germany have participated, is to gain more clarity and transparency about this dark side in our church, for the sake of those affected, but also to see for themselves the wrongdoings and to do anything to ensure they cannot be repeated.