Did the Pope's discovery of an influential "gay lobby" in the Vatican lead to his abdication?

The Vatileaks dossier as a fourth secret of Fatima . Three "James Bond" Cardinals had to write it, at the command of Pope Benedict XVI, after his former butler had removed some confidential documents. They all all over eighty and therefore will not enter the next conclave: Julián Herranz, Josef Tomko and Salvatore De Giorgi. Months and months of painstaking investigation, interrogation, analysis of the alliances that have been consolidated within the hallowed halls in order to compile, report after report, a file that is burning hot.
On December 17, the three cardinals have delivered the only existing copy into the hands of the Pope, as confirmed by the director of the Vatican press office, Father Federico Lombardi. A dossier on Vatileaks, which will be inherited by the new Pontiff, which even if only for the highly symbolic gesture of Benedict XVI who received in private audience on his penultimate day the three "007" cardinals, will weigh more than a little on the next pontificate. Today some excerpts of what was written in those papers are revealed by Conchita De Gregorio of La Repubblica  and Ignazio Ingrao of Panorama. 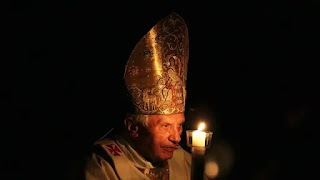 Everything turns around the infringement of two commandments: Do not commit adultery, do not steal. That is the sex and money which are in the middle of the dark story of Vatileaks. A dark page of the Church of Rome is destined to be open for a long time after the short reign of Ratzinger. As is apparent from these indiscretions, Benedict XVI, who has lived in the Roman Curia for thirty-two years, would have discovered by reading the pages of the dossier that the filth in the Church which he had denounced as a cardinal is far beyond his imagination.
From the report, and perhaps this is the part that shocked most of the Pope, there is a "gay lobby" within the Vatican, which included the most influential and networked within those hallowed halls.
The biographer of Benedict XVI, Peter Seewald, categorically ruled out, after having spoken directly with the German Pope about the drafting of a new book soon to be published, that the renunciation of the papacy has been made by Ratzinger because of the Vatileaks scandal. But most likely the file, which has been two months on the desk of Pope Benedict XVI, has confirmed the decision to give to someone else the government of the Church of Rome. This is a thesis that is supported by the director of "Tv2000", Dino Boffo, prominent among the victims of the Vatileaks story.
According Boffo, in fact, the Pope's decision to renounce the papacy is designed to "put an end to a power management which can offend the least and the lowly." "I think" - adds the director of TV forthe Italian bishops - that the Holy See should get rid of the infamous habit of anonymous letters without signatures and without senders ". Meanwhile, the last stab at the Pope comes from his homeland. A few weeks before the conclave, the German Bishops' Conference today expressed a favorable opinion, within certain conditions, about the administration of the morning-after pill to women who request it after they have been victims of rape . The yes of the fellow bishops of the Pope, however, is partial. The clinics are authorized to administer the pill only when clinically the drug can prevent fertilization of the egg and not when its effect would be to cause an abortion. The distinction is very important: human life begins, according to the decision of the German Bishops' Conference, when the egg is fertilized, then intervening before a human life is not suppressed.

Nick said…
Explain this sentence: "put an end to a power management which can offend the least and the lowly."