Oh, what a circus, Oh what a show!

The Cathedral of Auch in the Diocèse of Gers hosts what must be the silliest Mass of all time. Not least for the gymnastics that accompanied the reading of the Gospel. All time low point in Catholic liturgy. 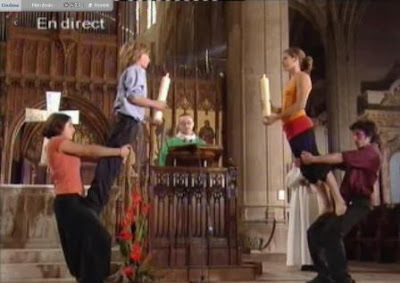 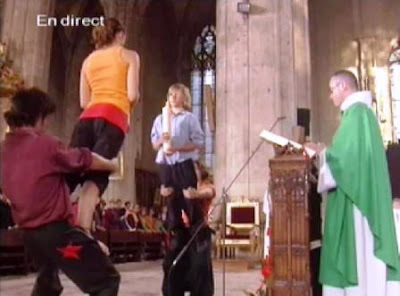 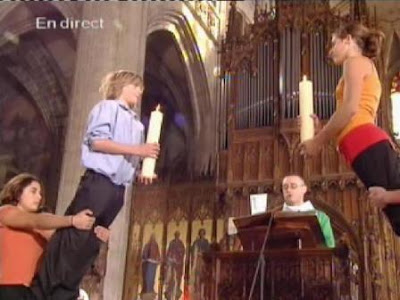 Dancing for the Offertory - maybe even the Elevation. 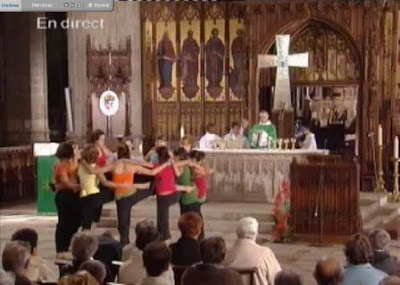 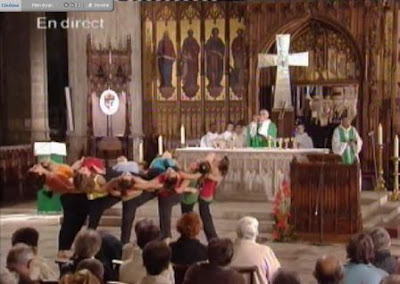 Juggling- dropped the Faith long ago 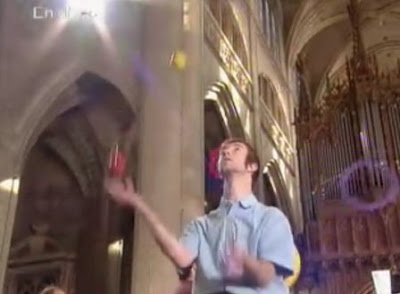 No comment.
The proper name for the whole charade 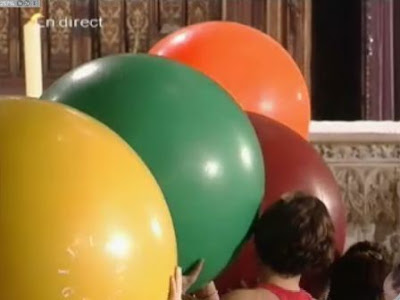 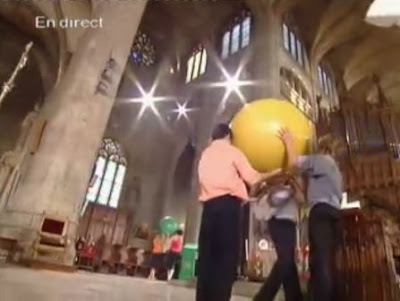 A commentary from a priest about the occasion, which does a beautiful job of accidental self-satire.

"What beautiful things were experienced during these three days of preparation for the Mass on television.”

By Father Lavenère, we felt welcomed into a large family composed of about thirty people representing 15 different occupations…

And with a dozen of them, we were very close and collaborators in the work of preparation, rehearsal and also in moments of friendly encounter, unforgettable during the discovery of local gastronomy much appreciated by our friends in Paris! I think that in these three days with us, they enjoyed duck in all its forms! As well as Armagnac much appreciated as a digestif (or as a gargle for the Priest who feared that he would loose his voice and wanted to treat his cold…).

Many told me of their wonder: a cathedral enlightened as never before! Young people of Pop Circus moving about with a lot of grace and solemnity (for which we even earned the praise of the producer of the broadcast of the "Day of the Lord" Brother Arnaud de Coral, who was somewhat stressed at the outset by the idea of integrating "circus" into the liturgy). We all have preconceived notions and the circus is actually just not clowning around… And then with André de Lavenère and Damien Supiot as presiders, there were no worries… The movements of the students from Pop Cicus melted naturally into the action of grace celebrated in the magnificent jewellery box which is our cathedral.

If all the locals have not pressed into the cathedral (+ 500 people in spite of everything), many told me that they followed the Mass on television! It's always impressive to know that we are watched by over one million people! Even some well-known local cafes, broadcast the Mass on their television for their customers, which if we are to believe what the landlords told me, followed the Mass while taking a glass of wine! . In any case, I am not sure that next Sunday at the same time, in the same cafes, there will be broadcast live the "Day of the Lord"…

It is a unique experience to preside over a Mass on television and so rewarding. Everything is superbly well organised and if we feel at the beginning concern at being live, we quickly forget that the cameras are all discrete enough to make room for prayer.

Finally Sunday evening, at the time of the Angelus, a tightrope walker from Marseille climbed the towers of the cathedral on a cable stretched from the Caisse d'Epargne without being attached! The peak was 28 metres high. I had the grace and honour to welcome him at the end of his ascension to the top of the tower, seeing his gratitude to the Good Lord and the Blessed Virgin (He assured me also of his devotion to Notre Dame de la Garde, in good Marseille dialect) and he thanked me for allowing this exercise on this beautiful monument. All the organisers have been very touched by this gesture that cost nothing but a few smiles and three small jokes…

The Good Lord touches hearts as he wants and when he wants. Let him receive all graces and honours since it is to Him that they return before anyone!

Joe of St. Thérèse said…
Looking at this actually makes me want to attend the Religious Ed Congress in LA. This is the LOWEST DAY in Catholic Liturgy History. I don't see any way possible it could get any lower. It's sad to see from a country that has produced wonderful Saints that such tragedy could occur in that country. But this is what happens when the regressives take over your liturgy you get stuff like this
8:25 PM

Steve said…
This is beyond disgraceful and abomidable. I'm sure that Satan is very pleased with this "service" and has many more such ones in store for the duped catholics of Newchurch!
5:36 PM

Hail3N1 said…
I just noticed that those "back bent, breast-ups" are performing during the "consecration"? Oh My..if anyone thinks satan and his cohorts are not walking this earth, they're in a dream world.
9:45 PM

Miss. Sara Lentz said…
"Juggling- dropped the Faith long ago!"
What would Pope Leo XIII do if he became aware of this when he was on earth?
2:10 AM

Miss. Sara Lentz said…
'Juggling- dropped the Faith long ago!"
What would Pope Leo XIII do if he had become aware of this when he was on earth?
2:11 AM