Cardinal Stickler, one of the all time great Cardinals has died 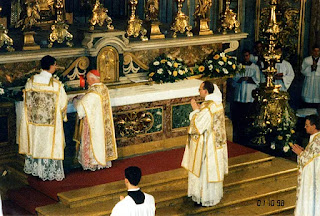 Cathcon translation of obituary in Der Standard Austrian Curial Cardinal Stickler has died The eldest member of the Cardinalate was in his ninety eighth year and "passed away peacefully" The Austrian Curia, Cardinal Alfonso Maria Stickler, the oldest member of the College of Cardinals, died in the Vatican on Wednesday evening at the age of 98, as Kathpress reports. The former prefect of the Vatican Library and Papal Archives (until 1988) came from Neunkirchen in Lower Austria, where he was born on 23 August 1910. While still young, he joined the Salesians of Don Bosco in 1937, and was ordained a priest. In September 1983 - just before the first visit to Austria by Pope John Paul II - was Stickler appointed in May 1985 to the Cardinal’s college, as Cardinal Bishop.

In 1983, Pope John Paul II appointed him as a successor to the Austrian Cardinal Antonio Samore, the "Pro-Librarian of the Holy Roman Church" and appointed him archbishop simultaneously to the Titular See of Bolsena. On 7 In July 1984, Pope John Paul II gave him responsibility also for the Vatican Secret Archives. During his tenure, Stickler tirelessly contined the the preservation and modernization of the Vatican library, which is not a repository of the world's richest collection of manuscripts (about 70,000), but also contains one million printed books, roughly 150,000 copper engravings, and a very valuable coin collection. Under the leadership of the Austrian cardinal, a great nuclear bomb proof bunker was built, in which the most important treasures of the library (including the "Codex Vaticanus) are accommodated. The conservative traditionalist Stickler was extremely hostile to the "Popular Church Movement" in Austria. The Cardinal, who was a strong supporter of the pre-Conciliar rite of the Mass said at that time in precise words that the "rebellion" was directed against the Pope and "against the very essence of our faith." The conscience of the individual must be subordinate to the authority of the Magisterium. "Passed away peacefully" Cardinal Stickler passed away peacefully on Wednesday night at 19.30 pm said the Linz diocesan Bishop Ludwig Schwarz in conversation with Kathpress. Stickler knew well Schwarz from his time as Provincial of the Roman province of the Salesians of Don Bosco. The oldest Cardinal lived in his last years secluded in his apartment in the Palazzo del Sant'Uffizio.

The late Cardinal came from a large family. He was the second of twelve children. After graduation in Vienna, he entered the novitiate of the Salesians of Don Bosco, and was professed on 15 August 1928. He completed his theological studies in Benediktbeuern and taught in Turin and Rome. He was a Doctor iuris utriusque of the Lateran University Stickler taught ecclesiastical legal history at the Canon Law Faculty of the Salesian University in Rome, was Dean of the faculty and finally Rector of the university. On 25 March 1971 (Ash Wednesday) Pope Paul VI appointed him the Prefect of the Vatican Library, which was according to Stickler himself, the most significant "change in his career path". On 8 September 1983, Stickler was appointed "Pro Librarian of the Holy Roman Church", while as well as Titular Bishop of Bolsena. Pope John Paul II personally consecrated him Bishop on the Feast of All Saints 1983. On 7 July 1984, Pope John Paul II also gave him responsibility for the Vatican Secret Archives. In the Consistory of 25 May 1985, Pope John Paul II made him Cardinal and give him as titular, the Church of San Giorgio in Velabro (the church was on the night of 27 to 28 July 1993 severely damaged in a bomb attack, believed to be the work of the Mafia). From this time, until his retirement, Stickler was Official Archivist and Librarian of the Holy Roman Church.
Psalm 129

Tony said…
May His Eminence's soul rest in peace.
5:10 PM

Chris Lauer said…
Does anyone know if there will be a public Requiem Mass in the Extraordinary Form no less?
1:52 AM