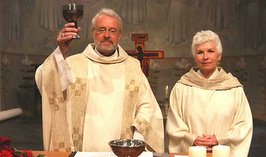 assisting at several of her Masses, regularly broadcast on Dutch TV.  She is not a priest, of course, but a pastoral worker. However, to finesse the idea that she could be a priest, she dresses like the real priest and both are called "Media pastors". Her diocese is the Diocese of Breda. This would be known in marketing as passing-off; pretending that you were a branded product when you are nothing of the sort. 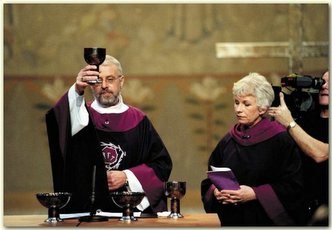 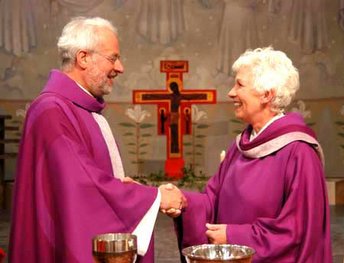 Redemptionis Sacramentum
[149.] More recently, in some dioceses long since evangelized, members of Christ’s lay faithful have been appointed as “pastoral assistants”, and among them many have undoubtedly served the good of the Church by providing assistance to the Bishop, Priests and Deacons in the carrying out of their pastoral activity. Let care be taken, however, lest the delineation of this function be assimilated too closely to the form of pastoral ministry that belongs to clerics. That is to say, attention should be paid to ensuring that “pastoral assistants” do not take upon themselves what is proper to the ministry of the sacred ministers.
[153.] Furthermore, it is never licit for laypersons to assume the role or the vesture of a Priest or a Deacon or other clothing similar to such vesture.
Thankyou to various correspondents on wiara.pl for pointing this out.

Ironically, her Christian name is "Joke", but this is not a "joke". She is the mother of two children. Both her and the priest were appointed personally to the media pastorate by none other than Cardinal Simonis in 1993. It is a long-standing and rather boring double act which some might say has rather unpleasant connotations, especially given the mimicry in dress. Not longer a stealth priestess. This one has broken radar cover and is all over Dutch TV. Distant from Rome, two neo-Catholic churches are being formed, one conservative, one liberal. And more liturgical decadence also broadcast on Dutch TV.
Email Post
Labels: cardinal Deacon Joke rome stealth priestess

Catharina said…
I know this is not really a comment that expresses charity but, when I saw those pictures, I just wanted to shake her 'till she wakes up. God have mercy on that woman and the man who is even worse allowing himself to be in that 'show'.
9:02 PM

Ecclesiastes said…
I watched the Dutch TV clip. It is amazing how a liturgical language is used - English! Yes, all those Taize chants are sung in English, though the congregation is Dutch. Note the flagrant liturgical abuse: the faithful dunking the sacred host into a glass of the precious blood. O me miserum!
12:50 AM

Sr. Micalah said…
God Bless this woman for her dedication to our Lord!
1:18 AM

Whewwww.....it's good that its just a piece of bread and their really all just laymen (and laywomen).

Chris-Translator from French and German into English said…
Always seeking balance, so I posted the last two comments! I disagree with both comments. Her work has not saved souls, rather endangered them. We live in terrible times when Catholic ordinations are even putatively invalid. Saints of every age are weeping. Indeed in generations to come, this will be known as the age where there was a dearth of sanctity. The media Mass is not going to produce sanctity. The worse thing is that this is all the elderly housebound, often near to death, see of the Catholic Church.
8:45 AM

Alarms in Discursions said…
"[153.] Furthermore, it is never licit for laypersons to assume the role or the vesture of a Priest or a Deacon or other clothing similar to such vesture."

The problem is, given the low level of catechesis in some quarters, it may confuse some of the faithful into thinking this is licit when it is not.
4:16 PM