kreuz.net exposes what is being done in the name of pastoral youth work in Germany. The 1960s generation are responsible for the empty churches; now they claim to be able to fill them by at the same time appeasing and competing with contemporary culture. Totally decadent and often corrupt. The pictures and their titles added by Cathcon- together with a small amount of commentary in square brackets.

40 tonnes of sand inside a Church

In the Diocese of Limburg, Germany three so-called youth churches have been fitted-out in the last three years. Limburg in Hessen on the River Lahn is about 50km northwest of Frankfurt/ Main. _____ 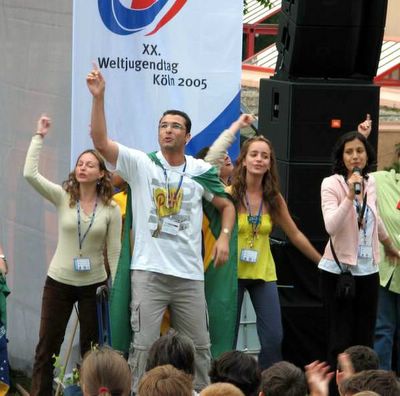 Frankfurt Youth Church presents Picnic of the Nations in preparation for WYD. 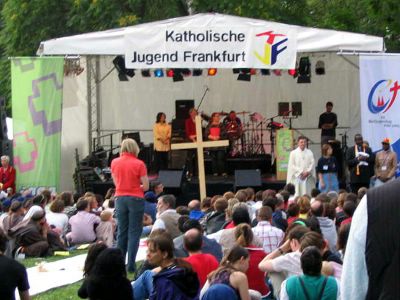 Mass at the Picnic of the Nations The Youth Office in Spring 2005 publicised themselves with the following leaflet; "Youth Church is a place to where your friends take you where you experience action and parties. There you can skate, spray, dance away, celebrate with theatre, music, live bands, hip-hop- Mass chill-out. There is a prize to be won if you can think of a knock-out name." This knock-out name of the Limburg Youth Church was chosen, "Cross-Over", i.e. a "to Cross" and/ or also "Across" or "all over the place". In any case, this is what's going to happen in the Church interior. 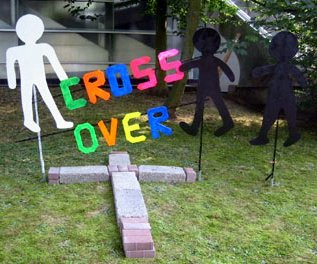 Youth are asked to desacralise the church interior as soon as they start with the fitting-out. They remove pews and the tabernacle and the Holy Sacrament which they deposit in a small side-room and this is renamed as the "Room of Silence". 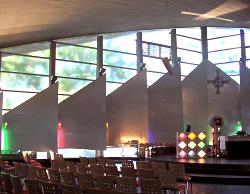 Everything that happens in the Youth Church happens on the inside. The happenings are all mirrored in the publicity and sales promotion and so-called "events". Spotlighting and light effects are professionally handled and there are break dancing, hip-hop nights and cinema evenings. Legendary events at the Oberhausen Youth Church were a skating project, a rope garden in the Church itself and the Desert/ Beach Experience – for the latter about 40 tonnes of sand were moved into the Church interior. [Cathcon: The Desert Fathers did not think they were having anything remotely like a Beach experience. This is a trivialisation of spirituality.] "Get the kick" is the title of the new half-yearly programme of "Cross-Over". Oberhausen is about 200 km north of Frankfurt and actually belongs to the Essen Diocese. The first German Youth Church was fitted-out in Oberhausen about five years ago. The youth churches in the Limburg Diocese take their inspiration from the Oberhausen concept. The idea for the youth churches is to compete with the professional leisure industry by using the same communication and publicity language as they use, so that the young people are lured away from other commercial entertainment. Even Bishop Kamphaus was shown off at the "kick-off" of the Wiesbaden Youth Church. He relaxed after Mass in the chill-out area of the Church with SacroPop and a lightshow. 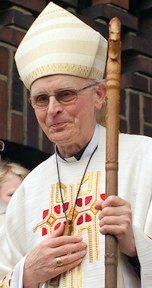 [Cathcon: As the Star Wars music played and the door of the Youth Church opened, it wasn't Darth Vader who came out, but Bishop Kamphaus with Staff and Mitre- from an account of the opening] The youth chaplains justify currying favour with the commercial spirit of the age as "authentic youth culture". Some of the young people are influenced by this modern event kitsch; " that's real fun". Alina (aged 14) is mad about it and Alexandra agrees with her "it was, for once, something completely different". But the Wiesbaden Youth Church has also heard critical youth voices. "Let's have no break dance or disco effects in the Mass" says Max and, "The Church must stay authentic and not become a space for partying", as a number of Wiesbaden pupils remarked. 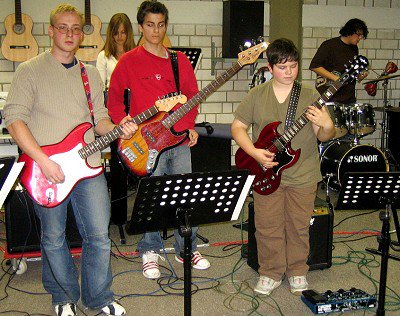 This worryingly entitled group, The Damned played in the Wiesbaden Youth Church. 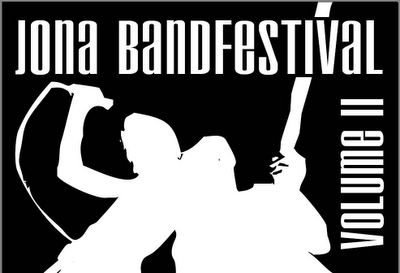 Featured band in Frankfurt "Sexy Miniskirt" - a strange title for a Catholic group to have. But such critical voices don't influence the chaplains; they have after all modern pedagogic authors on their side. To quote an example, "Pedagogical interaction at events, action-orientated identification and movement-intensive provision have an effect on the emotions of young people and train them to acquire soft skills, in which they exemplify the basic ideas of pastoral youth work". A confirmation group accepts the offer of the Youth Church on the topic "Faith in God". 40 young people gather in the sanctuary in which a rope ladder dangles, leading upwards. The youth chaplain lights a camp fire in a clay pot and talks about the story of Jacob's dream and the ladder into heaven, as in ancient times the Bedouins did. The group's task is now to saw the rungs of the ladder which are made of foam plastic (action orientation). They are then asked to colour them in various colours (emotional, aesthetic information). Finally, they need to connect the rungs with the ladder (soft-skill team ability). All this goes on in Church. The rope ladder is then hung-up in the side room. No exegesis or catechism takes place. The learning targets of the Youth Churches do not expressly teach the content of the Bible or the liturgy of the Church, but rather they are events for youth to find their own selves in these tasks. It is not surprising that Masses of such an "experimental character" only take place only two or four weeks, even if they talk broadly of a liturgical pulse which should be the core of the projects. The actual leitmotif of the Youth Church is the concept of self-realisation. This is the main thread which has been drawn in church youth work since the Würzburg Synod. This concept is diametrically opposed to the pastoral youth work of World Youth Day. [Cathcon: I think this means that WYD is less individualistic.] Those that set-up the youth churches says that self-realisation occurs in love and fun. The Limburg Youth Churches offers workshops for orientation days for school leavers under the motto "No love-no fun" [Cathcon: in contrast to "no love without sacrifice"]. 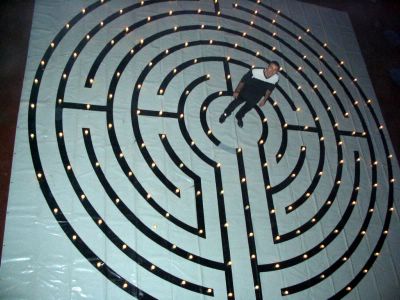 Frankfurt Youth Church Night of Light. Yes, they have a labyrinth, naturally enough. The Way of the Cross is not for them. 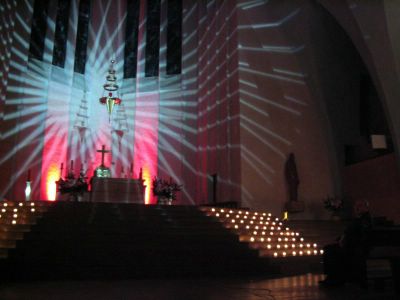 Alarming altar illumination at that same Night of Light. 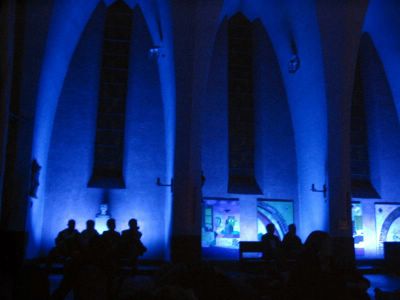 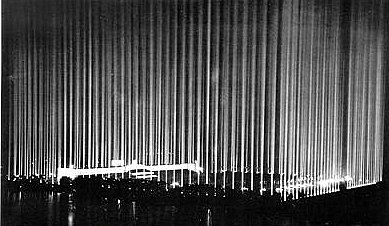 The Nazis got there first! The Lichtdom - Cathedral of Light designed by Albert Speer for Nuremburg. ___ 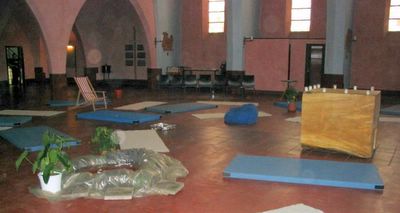 Church prepared for Mass at the Frankfurt Youth Church. 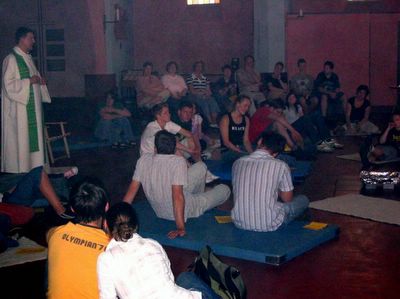 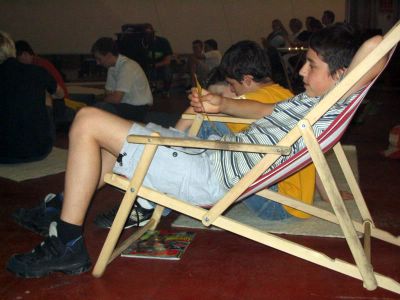 Relax no sacrifice today - just fun. ___ The Franfurt Youth Church is undertaking the project "Jonah in Love". On the 12 February, the musical "Erotica" in a "red light" environment was performed in the Youth Church space. 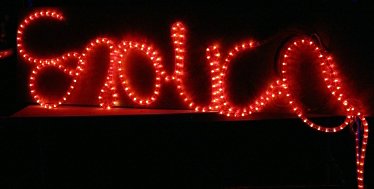 The actors in the performance came from the Oberhausen Youth Church. [Cathcon: the pictures I have seen of the performance are indecent, including actresses who look under 16 in sexually provocative roles. 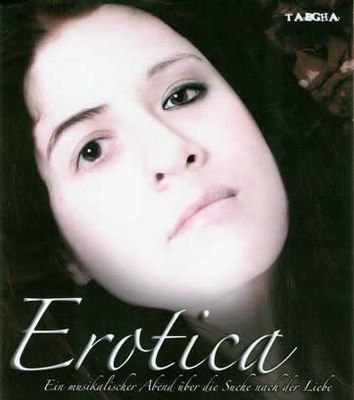 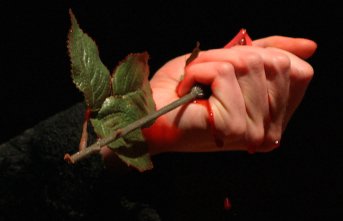 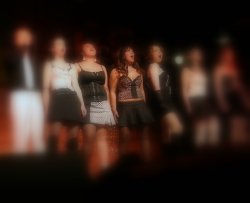 But Cathcon has discovered even worse: In Luxemburg there is a project "Pimp My Church" which is being run in a magnificent Church of St Joseph in Esch. Don't believe me: here is the advertising 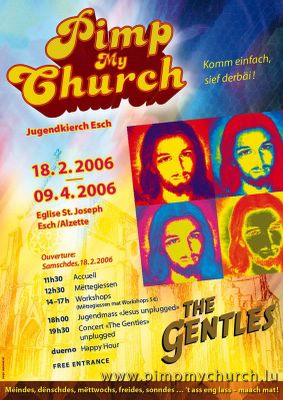 The priest responsible is a Father Paul Galles. (UPDATE 2022- Paul Galles has now left the priesthood and is pursuing a career in politics!) I asked by e-mail where is there a injunction in the Bible to "Pimp My Church" which is made to sound as if it is a command from God. Our Holy Mother is not a whore. The phrase originates from American evangelical groups; sick protestant minds . He replies: Thanks for the question. But don’t you have a bible? And why do you ask such a rhetoric question?

This is a plague of Youth Churches often using disused churches. The "catechism" that takes place is devoid of Catholicism, so it is not surprising that there is a strong ecumenical aspect. The Youth Church Network has been set up as a joint project by the German Bishops' Conference and the Evangelical German and promotes "Pimp My Church". Youth End result: young people cannot distinguish between Catholicism and protestantism. The Bishops often blame changes in society for their inability to communicate the Catholic Faith. No: it is the way they have chosen to communicate the Faith. If you can call it communication. It is not the Faith for which the martyrs died. Not so strange then they are called only Youth Churches and not put under the patronage of saints.

Tracy Hummel said…
FYI, see the site http://www.pimpmychurch.com/, where you will find the following definition of the term "Pimp my Church":

"Using the word “pimp” in the context of ministry was a choice that merited careful consideration. In years past, pimp was most often defined as a procurer of prostitutes. Pimps often exhibited a propensity for wearing fine, vivid clothing and driving expensive automobiles. However, as often the case, culture changes things.

When pimp was introduced into the English language in the early 1600s, it was derived from the French word pimpant meaning “to dress elegantly”. Over time, this verb was converted to a noun and began being used to describe a procurer of prostitutes. The verb for the word pimp also evolved at this time and became the “act” of someone procuring prostitutes. The reasoning for the shift in meaning is debatable though it probably had something to do with the dress-style of those in the business of prostitution.

Today, modern culture has presented a new definition for this word. In fact, this new definition is much closer to the original word in the English. As a verb, pimp means to improve or beautify. As a noun it means it simply means something good or fresh. MTV, a secular network aimed at young viewers, created a show based on this cultural shift. Pimp My Ride details the stories of young people who have less than perfect transporation. The show takes what are essentially piles of junk and improves them with fresh paint, good bodywork and some modern accessories to create a whole new “ride.”

While Pimp My Church does not support MTV or condone viewing its programs, we believe the opportunity to seize modern vernacular can be a successful tool in the Great Commission by reaching the lost “in their own language.” We also believe the original Message of Christ is the most important message to be delivered and should never be compromised or diluted in any way."

Not exactly what I would call edifying, but not what it sounds like either. It's yet another idiotic attempt to be "with it" and relate to the youth by dragging the transcendent down to their level, rather than calling them higher.
12:29 AM

Salammmbo said…
I'm sad to report that Father Paul Galles is back with a vengeance (see my blog). He also has his own homepage now, which really says it all. The address is http://gods_crew.hot.lu/, but be warned: it's not easy on the stomach. I have a very good mind to write to the Vatican.
4:19 PM

Salammmbo said…
And the saga continues. I've now been threatened with legal action by our friend for obtuseness and defamation. He claims I'm trying to come between young people and God. I'll keep you posted --- from gaol, if need be.
11:13 AM