The Devil and all his works

are on display in the Church of Notre Dame de la Chapelle in Brussels, Belgium. Indeed the altars of the Church have been transformed into exhibition stands for the works of modern art from an art collective. The relics are still in place in these altars. 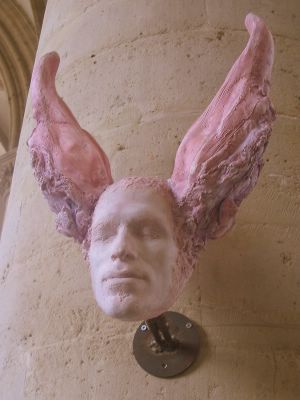 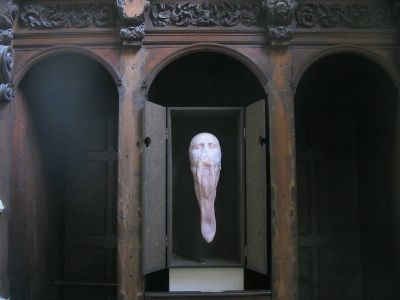 It is not just the smoke of Satan that has entered the Church, his image is now revealed and taking the place of the priest. This fine Church in the centre of Brussels has just one parish Mass a month but also is loaned to the Polish community for Mass. This work has no title. 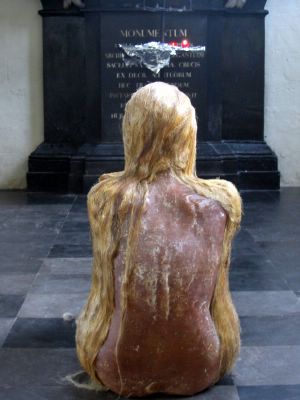 A view from the other side. An appalling idea of humanity. 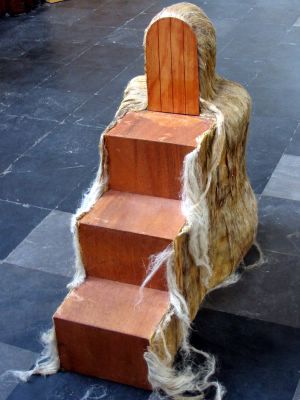 One work so distasteful that I believe that it has been removed. 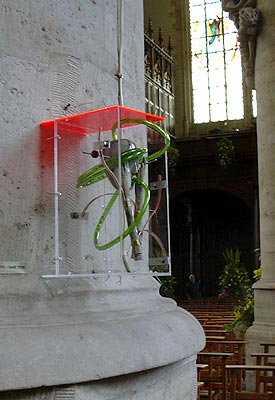 Also without title, but not a stairway to heaven given the grotesque forms that occupy the steps of the ladder. 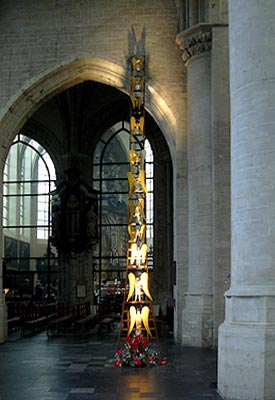 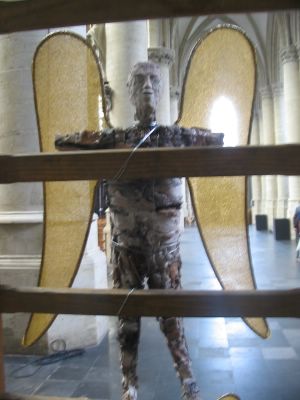 On each and every side-altar strange hands have been placed. This entitled "Natural Law" 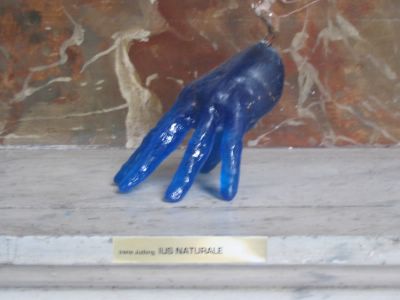 In this case, under Our Lady, Queen of Poland 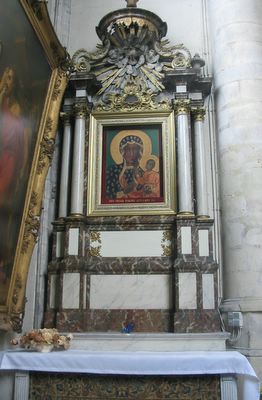 "Property ownership" and "Title" set upon the relics, and deliberately paroding the Sacred Heart. 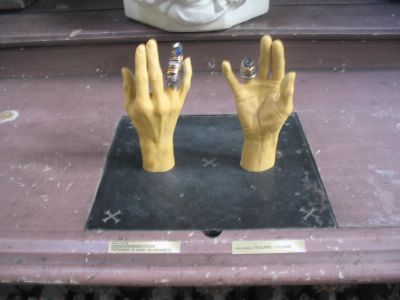 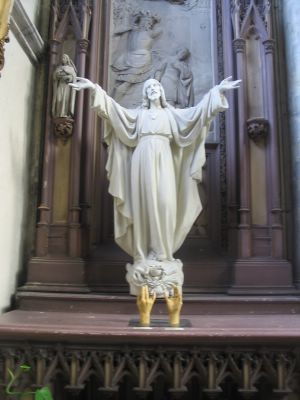 An exhibit immediately in front of the tomb of St Boniface of Brussels. 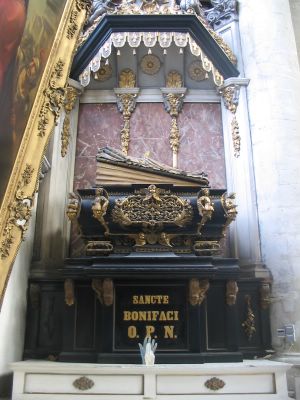 In front of a statue of St Christopher 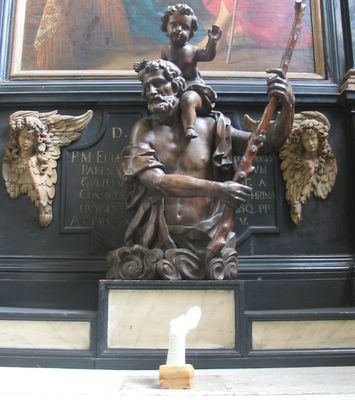 Perhaps all of these exhibits are an unconscious tribute to Thing from the Adamms Family. Whatever the case, they have no place in a Catholic Church. 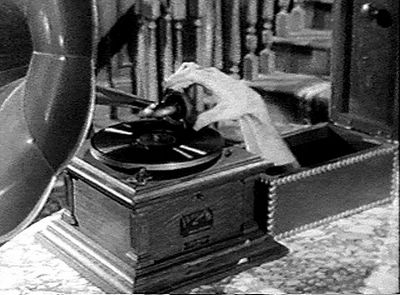 Another distorted image of humanity placed in front of a confessional. One of the angels is weeping. 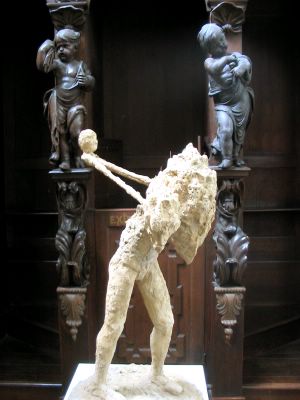 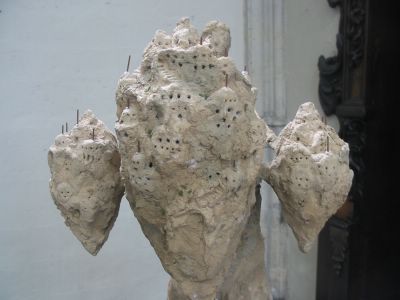 Another exhibit in front of a confessional 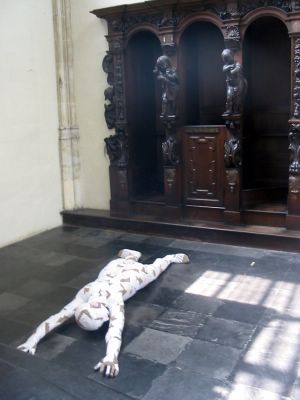 The form of a man covered in bank statements. Entitled Debit and Credit. 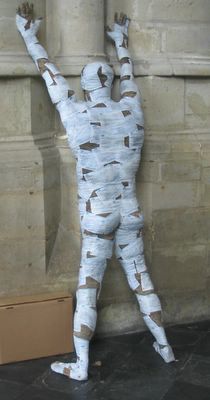 An ironic echo of today's Gospel account of Jesus throwing the money changers out of the Temple. Luke 19: 41-47 At that time, when Jesus drew near to Jerusalem, seeing the city, He wept over it, saying: If thou also hadst known, and that in this thy day, the things that are to thy peace: but now they are hidden from thy eyes. For the days shall come upon thee, and thine enemies shall cast a trench about thee, and compass thee round, and straiten thee on every side; and beat thee flat to the ground, and thy children who are in thee; and they shall not leave in thee a stone upon a stone, because thou hast not known the time of thy visitation. And entering into the temple, He began to cast out them that sold therein, and them that bought, saying to them: It is written, "My house is a house of prayer." but you have made it a den of thieves. He was teaching daily in the temple. ____ Entitled "It takes two to love". The implication is the erroneous belief that God is dependent on the love of humanity. 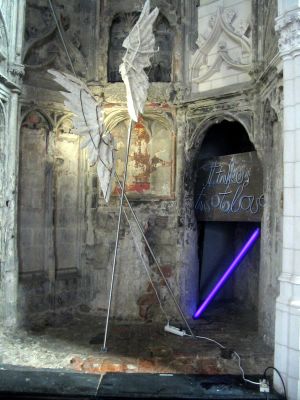 "The abomination of the desolation.....standing where it ought not" in the Chapel of the Blessed Sacrament which remains reserved. 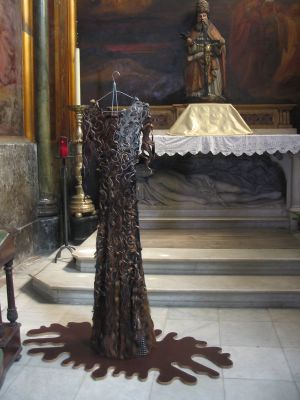 One side-altar offers a place where you have a "Right to Personality". Leave your own work of art. Better still, complain about the desecration of a Church. 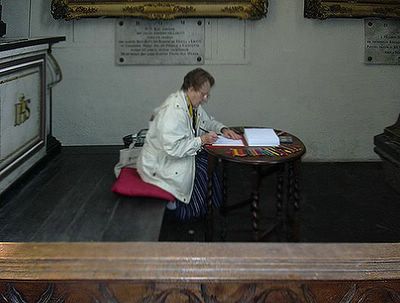 The woman sits with her back to Our Lady of Fatima, unsurprisingly minus crown. 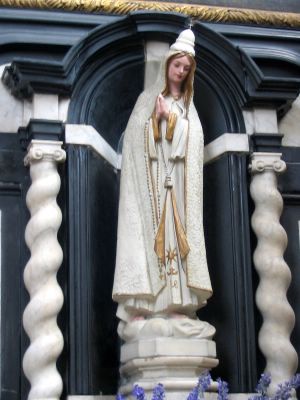 Who is responsible for this? The buck stops here with Cardinal Danneels who so desperately wanted to be Pope but came back from the Conclave with nothing. 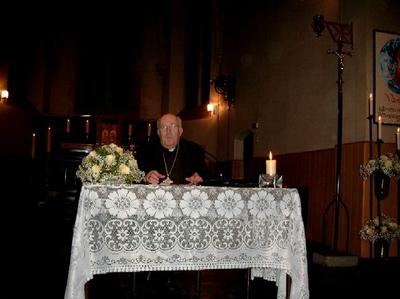