On 1 and 2 June, at the Olympic Stadium of Rome, the 37th Meeting of the Charismatic Renewal in the Catholic Church will take place. For the first time, a Pope will be in attendance.

The theme of the meeting is: "Repent. Believe. Receive the Holy Spirit. For a Church who goes out as ‘missionary’ "This was made known by the Charismatic Renewal of Italy, Rinnovamento nello Spirito Renewal (RNS) at the end of their VIII Congress in Fiuggi on 26 January.

The Charismatic Renewal is one of the so-called new religious movements in the Catholic Church. It took as its starting point in 1967 in the United States under Protestant guidance at Duquesne University.  This is a history that sparked criticism within the church and is seen by some as a "birth defect".  In Europe, the movement in the early phase was mainly supported by Leo Joseph Cardinal Suenens, Archbishop of Mechelen - 1961-1979 of Brussels, one of the moderators and progressive protagonists of the Second Vatican Council.   In 1975, representatives of the Charismatic Renewal for the first time were received by Pope Paul VI. In 1990, through the Pontifical Council for the Laity, there was a canonical recognition as a Catholic Fraternity of Covenant Communities and Fellowships. This is a community of believers of Papal right, established in the Vatican.

The Charismatic Renewal was filled with "great gratitude" about the "extraordinary" news that Pope Francis is to attend the meeting in Rome. The participation of the Pope had been officially confirmed by the Vatican Secretariat of State in a letter to the RNS - chairman. It will be the first time that a Catholic Church leader participates in a meeting of the ecclesial movement. In early June, around 50,000 believers from around the world are expected to attend the meeting in the Olympic Stadium in Rome. 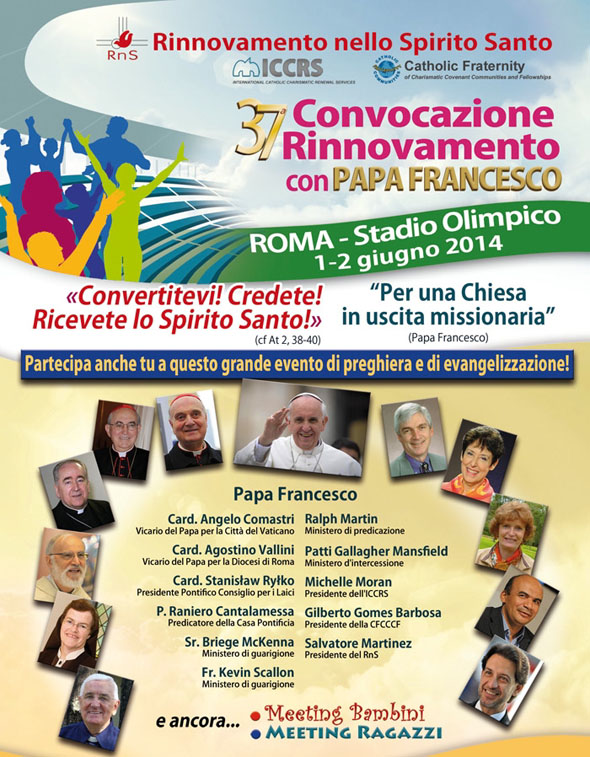 Pope Francis on the return flight from Rio de Janerio, stated his position on the Charismatic Renewal (see question from TV journalist below)

The Pope said that he had sustained in the late 70's and early 80's great reservations about this movement. Then, however, he had seen that they proceed in "a nice way" and do "much good” in the Church".  Therefore, he had as Archbishop of Buenos Aires "always favoured them, after I had changed my mind, as I have seen the good that they did".  A benevolent attitude, which the former Archbishop now thinks to continue as Pope.

Salvatore Martinez, chairman of the Charismatic Renewal in Italy and the main organizer of the meeting spoke of the "loving gratitude of a child for the care, the affection, the strength and freedom of the Father".
As Martinez reported that he was on the 9th September last year received by Pope Francis in private audience. On this occasion he had spoken to the head of the Catholic Church on the initiatives of the movement, including an account of the meeting in June. "The Pope was already informed about it and expressed his intention to take part in it," said Martinez. At Christmas, the official confirmation then followed. "Moreover, today we can announce this great joy in public," said Martinez a few days ago.
The Brazilian TV journalist Marcio Campos asked Pope Francis about Catholic Charismatic Renewal on the plane back from WYD.

Marcio Campos: Your Holiness, Holy Father [...] In Brazil, the Catholic Church has lost in recent years many believers. Is the movement of the Charismatic Renewal a way to avoid that the faithful visiting the [Brazilian] Pentecostal church or other Pentecostal churches? Thank you for your presence and thank you that you are here with us.
Pope Francis: It is very true what you say about the decline of the faithful: it's true, it's true. There are statistics.  We spoke to the Brazilian bishops about the problem at a meeting we had yesterday [Saturday]. You asked about the movement of Charismatic Renewal. I tell you something. In the years - the late 70s and early 80s - I could not encounter them. Once, when I talked to them, I said this sentence: "They confused a liturgical celebration with a Samba school!" That's what I said. I have regretted it. Then I got to know the movement better. It is also true that the movement has proceeded under good leadership in a nice way. And now I believe that this movement does much good in general to the Church. In Buenos Aires I have often gathered them together and once a year I celebrated a Mass with all of them in the cathedral.  I have always favoured them, after I had changed my mind, as I have seen the good that they did.   Because at this moment the church - and here I extend a little the answer - I think that the movements are necessary. The movements are a grace of the Spirit. But can a movement be stopped, which is so free? The church is free! The Holy Spirit is doing what He wants. Then He undertakes the work of harmonization, but I believe that the movements are a grace, these movements that have the spirit of the Church. Therefore, I believe that the movement of the Charismatic Renewal is not only utilized to prevent some conversion to the Pentecostal denominations! But no, it benefits the church herself! It renews us. And everyone is looking for the proper motion according to the charism to where the Spirit leads them.