Last year, four cardinals had made public their criticism of the Pope with their "Dubia". For this they learned a great deal of counter-criticism. One of them now defends the requests to Francis. 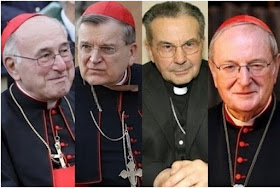 The German Cardinal Walter Brandmüller defended the "Dubia", which he co-wrote, to Pope Francis. He understood the criticism that had triggered the publication of the questions. But the step was "only taken after a waiting for an answer", he said in the interview of the "Frankfurter Allgemeine Zeitung" (Saturday). "And especially with regard to the fact that many believers have had the same questions and are waiting for an answer," the Cardinal explained.

"What do you mean, what phone calls, letters, inquiries we get?", Brandmüller continued. "They also say," Why do you not do anything, you Cardinals ? "We finally made an oath of office and are by office advisers to the Pope." They had asked for an audience, but they also did not receive an answer on this, the 88-year-old said.

In the context of his view of liberal interpretations of the Papal letter, the Cardinal emphasised: "It is a dogma that marriage is a sacrament and therefore indissoluble." This means, "He who asserts that one can enter into a new marriage during his lifetime of his lawfully married wife is excommunicated, because this is an erroneous teaching, a heresy." Whosoever is aware of a serious sin such as adultery, can only go to the Eucharist if he has previously repented, confessed, and been forgiven.

He had "great concern that something would explode," said the former President of the Vatican Historical Commission. The fact that the requests of thousands of people remained unanswered, raised questions. "This is really hard to understand," the prelate said.

After all, the central question is: "Can something good if something was a sin yesterday?" In addition, the question is asked whether there really are acts that are "morally reprehensible" under all circumstances - such as the killing of an innocent or adultery. "If in fact the first question should be answered with yes and the second with no - then this would be heresy, and, as a result, schism, division of the church," said Brandmüller.

The Papal letter "Amoris laetitia" of 2016 is the reason for the "Dubia" (doubts). The Pope said that Catholics who had married again after a divorce could be admitted to the communion. The Cardinals Walter Brandmüller, Raymond Leo Burke and the now deceased Carlo Caffarra and Joachim Meisner first asked Francis personally, then in November last year publicly to clarify the interpretation and categorisation of "Amoris laetitia".